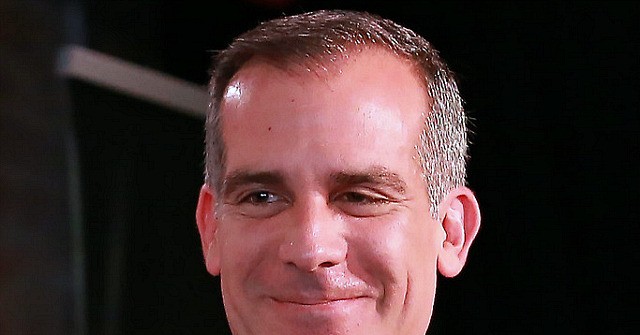 Los Angeles Mayor Eric Garcetti claims that he held his breath when snapping that viral photo of him maskless alongside NBA legend Magic Johnson at the Rams game.

On Sunday, Magic Johnson tweeted several photos of himself standing alongside Eric Garcetti, California Gov. Gavin Newsom (D), and San Francisco Mayor London Breed, all of whom were maskless in violation of their own coronavirus restrictions.

Speaking at a press conference on Wednesday afternoon about security for the Super Bowl in Los Angeles next week at SoFi stadium, Garcetti, Biden’s current nominee as Ambassador to India, excused the photo by saying he held his breath.

“I’ll take personal responsibility, and if it makes you and everyone else happy — or even the photographs with people where literally I’m holding my breath for two seconds — I won’t even do that,” said Garcetti.

“When people ask for a photograph, I hold my breath,” Garcetti also said.

Eric Garcetti hopes you’re dumb enough to believe that he held his breath every single time he took his mask off at the Rams game. pic.twitter.com/r4FQeE24FY

On Monday, a Garcetti spokesperson told ABC7 that the mayor “was wearing a mask at the game and removed it for a brief moment to take a few photos.”

Current Los Angeles County Public Health policy requires that “masks must be worn at such mega-events, even at outdoor gatherings,” according to Deadline.

Go #Rams!@RampageNFL and I are ready to see the Rams win Super Bowl LVI right back here in two weeks! pic.twitter.com/IOJuM65GVv

Both Garcetti and Newsom were severely criticized by the Los Angeles Times earlier this week, saying the California politicians undermined their own edicts.

“There was understandable outrage when Newsom, Los Angeles Mayor Eric Garcetti and San Francisco Mayor London Breed were photographed without masks during Sunday’s NFC championship game,” the Times wrote. “The three Democrats have championed some of the nation’s most restrictive COVID-19 mitigation measures.”

Speaking with reporters on Monday, Gavin Newsom said that he kept his mask on throughout his time at the NFC Championship game and that he only removed his mask for a photo with Laker legend Magic Johnson when he asked for one.

“I was very judicious yesterday, very judicious,” said Newsom. “And you’ll see the photo that I did take where Magic was kind enough, generous enough to ask me for a photograph, and in my left hand is a mask, and I took a photo. The rest of the time, I wore it as we all should. Not when I had a glass of water. I encourage everyone else to do so. And that’s it.”

Footage and photos from that day appeared to contradict the governor’s account:

California governor Gavin Newsom said he only took his mask off for a “brief second” for a photo at 49ers-Rams. Here he is on live TV during the game without his mask on. Liars gonna lie: pic.twitter.com/AiQOcb740y

This FanCam still of @GavinNewsom is now making rounds on the Twittersphere — earlier today the governor said he only took his mask off at the #NFCChampionship for a “brief second” to take a picture with Magic Johnson, and then later while drinking water. https://t.co/hwmbs2qrrm pic.twitter.com/3JDwSlhO4Q