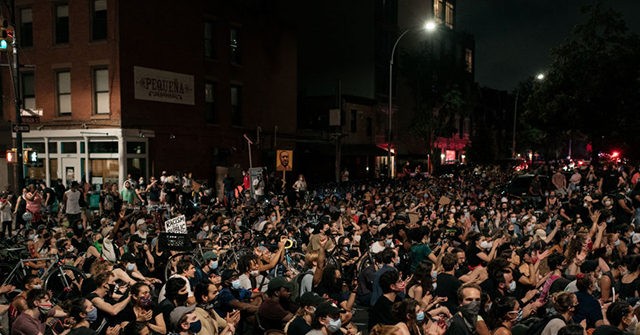 NBC News on Sunday displayed the widespread hypocrisy in establishment media coverage of President Trump’s MAGA rallies, posting a cautionary piece on the president’s decision to resume the iconic events in the age of the coronavirus yet failing to extend the same analysis to the massive crowd that congregated for the Black Lives Matter, LGBT demonstration in Brooklyn Museum plaza on Sunday.

“Protesters packed the courtyard of the Brooklyn Museum and surrounding parkway in New York City on Sunday in support of Black trans lives, merging the fight to protect two deeply marginalized groups,” NBC reported, estimating the crowd to be “likely in the thousands.”

“As the country rallies behind dismantling racist systems that put Black lives at risk in the wake of George Floyd’s death, activists have also put a lens on Black trans people who are at the intersection of two dangerously marginalized groups,” the outlet continued.

NBC did not once mention the coronavirus or risks associated with large gatherings throughout the entire article.

“President Trump plans to rally his supporters next Saturday for the first time since most of the country was shuttered by the coronavirus. But health experts are questioning that decision,” NBC News tweeted:

President Trump plans to rally his supporters next Saturday for the first time since most of the country was shuttered by the coronavirus. But health experts are questioning that decision. https://t.co/7FquU1wWw2

NBC News appealed to health experts, who warn of the virus “spreading among the crowd and sparking outbreaks when people return to their homes.”

The outlet was relentless in the piece, painting a dire picture laden with cautionary language, yet failing to do so in its previous description of the Black Lives Matter and LGBT protest, which likely drew thousands:

The Centers for Disease Control and Prevention outlines the highest risk events for transmission of the coronavirus this way: “Large in-person gatherings where it is difficult for individuals to remain spaced at least 6 feet apart and attendees travel from outside the local area.” The CDC recommends cloth masks in places where people might shout or chant.

Trump’s rallies typically draw tens of thousands of supporters. They usually stand outside in line for hours before passing through airport-style security and cramming into an arena, where they sit side by side or stand shoulder to shoulder. The rallies are typically raucous, with much shouting, cheering and chanting. Some people dance and jeer at reporters. Sometimes protesters are met with violence before they are removed by security.

Dr. Ashish Jha, director of Harvard’s Global Health Institute, called the upcoming Trump rally “an extraordinarily dangerous move for the people participating and the people who may know them and love them and see them afterward.”

Little over an hour apart. pic.twitter.com/K2a7fGRNDd

NBC is hardly alone in its purported agenda. Former Trump challenger Hillary Clinton, citing the disclaimer on the registration page for Trump’s upcoming rally in Tulsa, suggested that he should not be holding rallies at all:

If your rallies come with a liability waiver, you shouldn’t be holding them. https://t.co/J1BgdUec9k

“Trump wants 15,000 delegates cheering him at his GOP convention in Florida. No social distancing. His rejection of medical advice endangers not only those there but those they come in contact with,” Sanders said:

Trump wants 15,000 delegates cheering him at his GOP convention in Florida. No social distancing. His rejection of medical advice endangers not only those there but those they come in contact with. Trump’s a threat to the health and well-being of the country. He must be defeated.

However, both Clinton and Sanders have failed to extend the same criticisms and warnings to the throngs of protesters flocking to the streets in recent weeks. In fact, Sanders explicitly said he is “proud of the people standing up for justice and taking to the streets.” Similarly, Clinton has yet to condemn protesters or accuse them of putting others in danger.