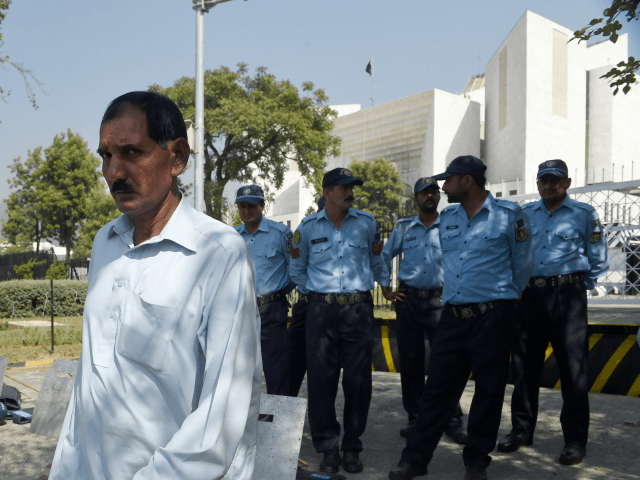 The husband of a Pakistani Christian woman at the centre of a divisive blasphemy case has pleaded for sanctuary in the U.S., Canada or the U.K, saying he fears for his family’s safety.

Asia Bibi’s husband Ashiq Masih made his plea a day after he criticised a government deal with hardline Islamists that left her in legal limbo.

Bibi — who had been on death row since 2010 on blasphemy charges — was acquitted by the Supreme Court on Wednesday after the case was thrown out on the basis of “flimsy evidence.” That set off large street protests by ultra-conservative Islamists who convulsed Pakistan for three days, blocking roads and disrupting traffic.

#Lahore under siege by Islamic clerics on acquittal of #Asiabibi .#Punjab government seems to have no plans to control the situation . pic.twitter.com/RbnKVoMCfd

The government reached a deal Friday to end the protests by agreeing to a travel ban preventing Bibi from leaving the country, and saying it would not object to hardline movements appealing the verdict.

An appeal has now been filed with the court against Bibi’s release, which Masih criticised as “wrong”.

“I request President Donald Trump to help us to leave (the country), and I request the prime minister of the U.K. to do their level best to help us, to grant us freedom,” said Masih, in a video message, seen by AFP, also requesting help from the Canadian prime minister.

“The daughters are weeping. They still haven’t seen their mother. The family is totally shattered,” he said.

“They absolutely don’t know when they will see their mother. Since (the court decision), with the violence and the protests, it is too dangerous for them to see their mother in jail.”

The call for freedom comes after Wednesday’s confirmation that the family is “living in straight terror,” as the chairman of a charity aiding Christians in the country told Breitbart News.

“Asia Bibi has suffered enough, she just needs a country willing to rub away any bureaucracy,” Wilson Chowdhry, the head of the British Pakistani Christian Association (BPCA), explained, adding that Bibi herself is “totally terrified,” and her family – her husband, three adult children, and two dependent children – are currently beginning the asylum process.

Pakistan’s Mullahs call for an uprising against “Jew” PM @ImranKhanPTI. Urge “Muslim” Army generals to stage a coup and topple current Chief Gen. Bajwa who they declare is an Ahmadi. In addition, they’ve declared the 3 Justices who acquitted #AsiaBibi to be lynched. pic.twitter.com/4RvtbepBzw

Embassies can take months to process asylum requests, however, and Chowdhry noted that, given the amount of animosity against Bibi, she may not have that much time before someone attempts to kill her.

The BPCA has launched a petition demanding asylum for Bibi and her family.

The family wishes to go to the West, he added, because it lies outside a region where Christian persecution dominates, and her decade-long struggle for freedom is internationally known. Nearby Pakistan, and nations like Afghanistan, India, China, and Iran have extensive histories of persecuting Christians.

AFP contributed to this story.