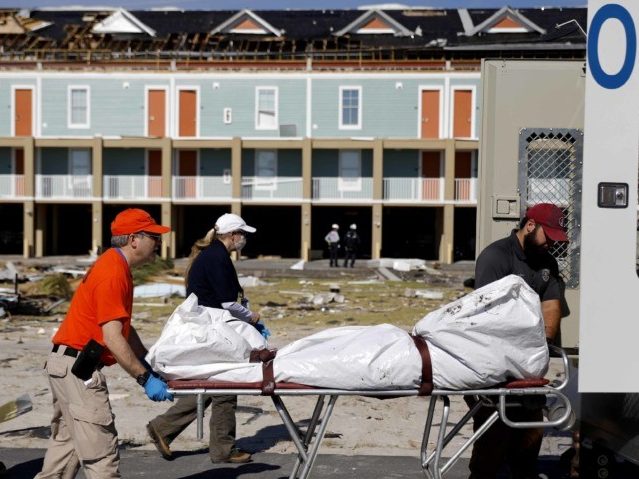 The number of dead now stands at 18 as the aftermath of Hurricane Michael is assessed. But authorities warn that there will likely be more bodies discovered as rescue workers dig through the rubble left by the storm.

On Saturday, a man was found dead in Virginia, making him the 18th victim of the Category 4 storm. But there is still no clear answer to the number of people presumed missing this soon after the storm’s passage.

Panama City officials fear that the death toll could rise to double digits just in their area alone.

Florida Governor Rick Scott said Saturday that MRE meals and water had been set on the road toward the areas hardest hit. Florida National Guard troops have already distributed four truckloads of water and one truckload of MREs. Also, on Friday, two truckloads of water, each filled with 1,400 cases, were distributed to affected residents.

The harsh storm, one of the most powerful in 50 years, made landfall at the Florida Panhandle on Wednesday as a Category 4 storm, but it quickly depleted its shocking force becoming a Category 1 storm only a few hours later.

Michael skipped northward and hit the shores of Georgia and the Carolinas, and then hit Virginia by 11 p.m. on Thursday buffeting the Commonwealth with winds of 50 mph.

Thus far, eight Floridians have been identified as fatalities due to the storm. Three were killed in North Carolina, one in Georgia, and six in Virginia.

Thousands of national guard troops have fanned out in the affected states as residents attempt to try and find missing loved ones and assess the wide-spread damage to homes and businesses.

Mexico Beach, Florida, for instance, is said to have suffered the destruction of nearly 75 percent of its buildings. The town was nearly wiped off the map by the powerful storm. In another case, Florida’s Tyndall Air Force Base was nearly razed to the ground. The Air Force has already reported that 100 percent of the facility’s structures were damaged and all are uninhabitable.

The base was evacuated before Michael hit and all 3,600 personnel are listed as safe.