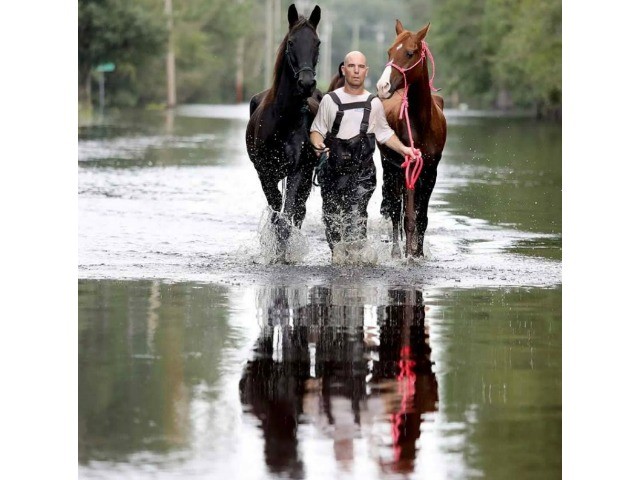 This is not the first time Patrick McKann has mounted his horse to ride into storm-ravished communities to rescue animals left behind when their owners were forced to flee without them. McKann — or Hurricane Cowboy as he’s become to be known — began his mission last year when Hurricane Harvey slammed into Texas.

He also hit the trail to come to the aide of stranded animals after Hurricane Florence.

And now McKann, a horse trainer who lives in Virginia, will be saddling up again and lead a posse to help save animals following Category 4 Hurricane’s Michael’s devastating hit on the Florida Panhandle, an ABC affiliate reported.

“This is who we are, this is what we do,” McKann told 8News.”We just want to help people, and that’s what you’re supposed to do is live by the golden rule, helping others.”

McKann’s operation is a bit different than other rescue programs because his team concentrates on large animals like horses and cattle.

He’s been named the “Hurricane Cowboy.” Patrick McKann, of Henrico, is leading an effort to rescue horses, cows and other farm animals left suffering in the flood-torn Carolinas. >> https://t.co/4ymJOpFuMX pic.twitter.com/FWpENlQG01

“The way we treat it like a military operation,” McKann said. “We go in, do a 30-second huddle, figure out what our mission is and go to work.”

“The Hurricane Cowboy even rode through flood-ravaged areas of the Carolinas to rescue abandoned animals in Hurricane Florence’s aftermath. McKann said it was like a wild west war zone,” 8News reported.

“When we were in Florence and leaving horses out, there were some snakes that kind of crossed in front of us, and the water would bubble up in front of you, and you wonder if it’s a gator under there,” McKann said.

McKann told 8News that he uses his own resources to pull off the rescue operations, but he has set up a GoFundMe page to help defray costs.