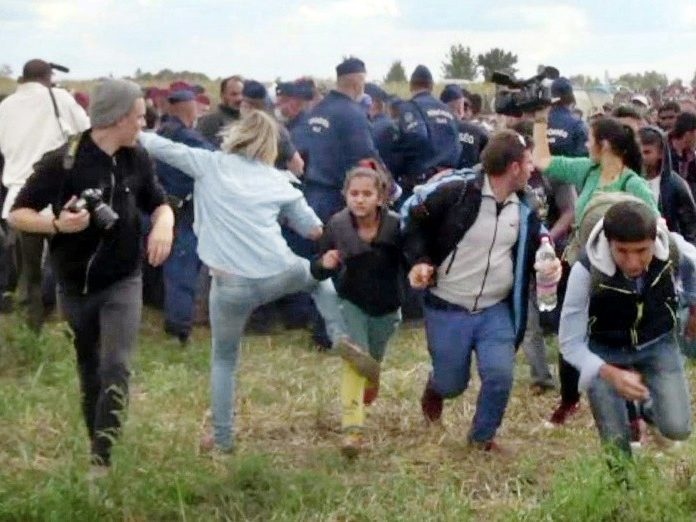 The Hungarian camerawoman who made headline news after she was filmed tripping up migrants as they ran away from police has been acquitted by the country’s top court.

As Breitbart London reported at the time of the incident, which took place at the height of Europe’s migrant crisis in September 2015, Petra Laszlo was fired from her job at right-wing broadcaster N1TV when the footage of her kicking a girl and tripping up a man and his son was broadcast across the globe.

Following international outrage over the clip, Laszlo apologised for her actions in a letter published by newspaper Magyar Nemzet explaining that she “panicked” after hundreds of migrants broke out of a holding camp close to the Hungary-Serbia border and rushed a police line.

Sentenced to three years probation in January last year, the Hungarian was acquitted on Tuesday by the country’s highest court when it ruled that her actions, “while morally incorrect and illicit”, did not amount to criminal activity, and noted it had taken into account the context of “an assault by several hundred migrants fleeing a police intervention”.

Hungary builds a wall; cuts illegal immigration by over 99 per cent. Lessons for President Trump…? https://t.co/ME09N3n3eg

“I turned and saw several hundred people charging toward me, it was quite incredibly frightening,” recalled Laszlo, who had reported being the recipient of “many death threats” after attention was drawn to the video.

After an outpouring of support from the international community, the man whom Laszlo attempted to trip up in the footage, Osama Abdul Mohsen, was offered asylum in Spain and a job at a football academy near Madrid.

Mohsen said he refused to accept Laszlo’s apology when he told an interview with CNN: “I tell her, be sure you Hungarian journalist that karma will get back to you, and God will not leave this be.”

However, less than a week after Mohsen’s appearance on the globalist U.S. outlet, during which he announced he intends to sue Laszlo, reports emerged that claimed the former football coach had fought with Syria’s al-Qaeda-allied Nusra Front, and had allegedly instigated violence that resulted in the deaths of more than 50 Kurds following a soccer match in 2004.