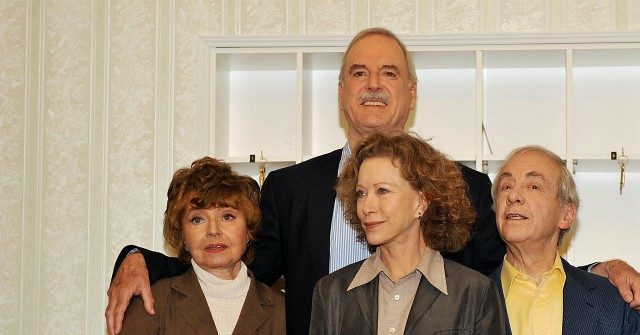 Brexit Party leader Nigel Farage has declared “humour is dead” after a BBC-controlled network removed an episode of the cult 1970s series Fawlty Towers because it was deemed racist and contained “outdated language”.

The BBC-controlled UKTV streaming service announced on Thursday that it had “temporarily removed” the episode often referred to in fan circles as “Don’t Mention the War”.

In a statement posted to Twitter, the channel said: “UKTV has temporarily removed an episode of Fawlty Towers ‘The Germans’ from a Gold Box Set.

“The episode contains racial slurs, so we are taking the episode down while we review it. We regularly review older content to ensure it meets audience expectations and are particularly aware of the impact of outdated language.

“Some shows carry warnings and others are edited. We want to take time to consider options for this episode.”

If Fawlty Towers is now being removed by the BBC then humour is dead. The puritans are winning because the establishment is weak and has no self confidence.

The episode, first aired in 1975, shows Basil Fawlty, played by John Cleese, goose-stepping around his hotel shouting “Don’t mention the war!” with German guests in earshot. The episode also showed Fawlty expressing shock at being treated by a black doctor and Major Gowen making bigoted remarks about the West Indies cricket team.

At the time, the intention was to mock Gowen and Fawlty for their outdated views and language, that purpose being evident to 1970s viewers.

This is not the first time a BBC affiliate misunderstood comedy and took the mockery of bigotry as an endorsement of racism. Last year, the ITV-BBC joint venture Britbox banned Till Death Do Us Part due to the lead character Alf Garnett’s bigoted views, despite the premise of the comedy being that the viewers laughed at Garnett, not with him.

In reaction to the BBC-controlled UKTV quarantining the famous episode, the 80-year-old John Cleese branded the move “stupid”.

“One of the things I’ve learned in the last 180 years is that people have very different senses of humour,” the Monty Python member told The Sydney Morning Herald on Friday.

Explaining comedy in very simple terms, he said: “Some of them understand that if you put nonsense words into the mouth of someone you want to make fun of you’re not broadcasting their views, you’re making fun of them.”

Condemning the New Puritans, he continued: “Fawlty Towers has given a large number of people a great deal of happiness, why would you want to stop that… It reminds me of the definition of a Scottish Presbyterian as someone who has a nasty, sneaking feeling that someone, somewhere, is having a good time.”

He then criticised the BBC, saying: “A lot of the people in charge now at the BBC just want to hang onto their jobs. If a few people get excited, they pacify them rather than standing their ground as they would have done 30 or 40 years ago.”

In the wake of the Black Lives Matter protests sweeping the U.S. and UK — where dozens of memorials to “colonialists”, “racists”, and “slave owners” have been vandalised and even torn down — woke media outlets have descended on their back catalogues to memory-hole anything deemed offensive.

In the United Kingdom, the BBC pulled Little Britain and Come Fly With Me from their iPlayer for portrayals of ‘blackface’; both shows are less than 20 years old.

Netflix also memory-holed BBC productions the League of Gentlemen and the Mighty Boosh. Again, that was due to instances of ‘blackface’ in the late-nineties/early noughties shows. However, in a move of curious inconsistency, the BBC told The Guardian that both programmes are still available on BBC iPlayer.

While in the United States, HBO blacklisted Civil War epic Gone with the Wind from its streaming services for depicting outdated attitudes to slavery. Hattie McDaniel became the first black actor to win an Oscar for her portrayal as Mammy in the film, winning Best Supporting Actress in 1940.

Almost immediately after the HBO ban, the film became the number one best selling movie on Amazon.