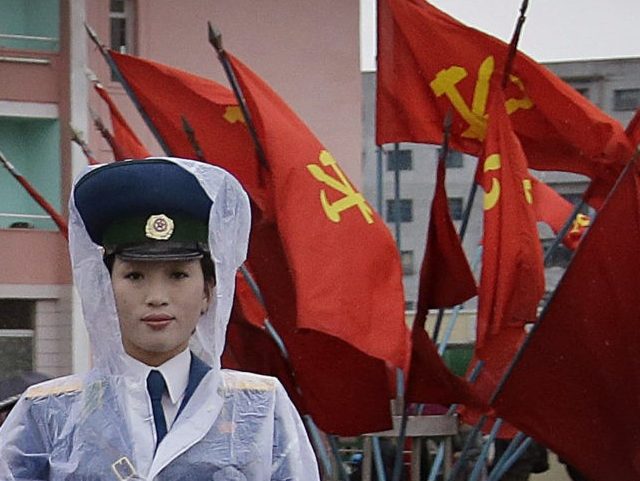 Human Rights Watch (HRW) on Wednesday released a report on “endemic” sexual violence in North Korea. The report was three years in the making, due in part to the exceptional difficulty of obtaining reliable data and testimony from one of history’s most oppressive nations.

HRW concluded the abuse of women has “come to be accepted as part of ordinary life” in North Korea and called for international intervention.

The report, whose title quotes a North Korean victim of abuse who said women “cry at night and don’t know why,” is billed by HRW as “the most extensive study ever done of sexual violence in North Korea.” It is not the first such study, as a July white paper from the Korean Institute for National Unification and a 2014 United Nations inquiry reached similar conclusions.

Nearly everyone in North Korea is subject to abuse by the brutal Communist regime, but the report argues women are exceptionally vulnerable because corrupt soldiers and government officials demand sexual favors as bribes.

“On days they felt like it, market guards or police officials could ask me to follow them to an empty room outside the market, or some other place they’d pick,” a female textiles trader told Human Rights Watch. “What can we do? They consider us toys.”

Sexual abuse is often part of how the North Korean regime punishes female prisoners, especially those who attempt to flee the regime and either fail to escape or are returned by China. The victims know they are only asking for more trouble by reporting abuse to the authorities – possibly the kind of trouble that involves multiple generations of entire families getting permanently sentenced to labor camps as dissident troublemakers. At a minimum, North Koreans depend upon the good graces of capricious officials for things like access to marketplaces, and they can instantly lose official favor by complaining.

HRW interviewed 54 North Koreans from diverse backgrounds for its research, noting that “the precise number of women and girls who experience sexual violence in North Korea is unknown” because “survivors rarely report cases, and the North Korean government rarely publishes data on any aspect of life in the country.”

The data North Korea does release is laughable, as with its claim that “just nine people in all of North Korea were convicted of rape in 2008, seven in 2011, and five in 2015.” Very few of that tiny number of sexual assaults were portrayed by Pyongyang as officials abusing their authority. Only one of the victims interviewed by Human Rights Watch bothered trying to report her assault. Former North Korean government officials who spoke to HRW said the authorities rarely investigate sexual assault claims unless the victims are “severely injured or killed.”

Another problem facing women in North Korea is that they have nothing remotely comparable to the resources available to victims of sexual assault in other countries. There are no support networks, psychiatric care is stigmatized, medical professionals have no training to deal with sexual assault, and North Korea’s strict caste system leaves victims feeling isolated and afraid to ask for help.

HRW has a few words to say about that caste system, a feature of the North Korean horror that is not well understood by casual outside observers:

Sex discrimination and subordination of women are pervasive in North Korea. Everyone in North Korea is subjected to a socio-political classification system, known as songbun, that grouped people from its creation into “loyal,” “wavering,” or “hostile” classes. But a woman’s classification also depends, in critical respects, on that of her male relatives, specifically her father and her father’s male relations and, upon marriage, that of her husband and his male relations. A woman’s position in society is lower than a man’s, and her reputation depends largely on maintaining an image of “sexual purity” and obeying the men in her family.

The HRW report concludes with recommendations the North Korean government is extremely unlikely to accept since it would never admit to having the problems HRW is offering solutions to. One of the recommendations is to “gather credible data” on complaints and prosecutions for public release. Pyongyang is not in the habit of gathering credible data for public release on anything, never mind an endemic crisis that makes a sizable portion of the political elite look like rapists and brutes.

Some of the recommendations for other countries to take with respect to North Korea’s sexual assault crisis, including the United States and South Korea, boil down to offering “assistance” with a problem the regime, again, would never admit to having.

The pertinent question is whether sexual assault or any other aspect of human rights will be on the table during nuclear negotiations. Would South Korea jeopardize the diplomatic achievements of President Moon Jae-in and his administration to take a tough stance against North Korea on women’s rights? Would the U.S. government risk its goal of complete denuclearization to insist North Korea admit to widespread sexual abuse by officials and do something about it?

Voice of America News put the question to South Korea’s Unification Ministry on Wednesday and received assurances via email that the Moon administration “places emphasis on human rights in the notion of universal value and ethnicity, and strives to continuously improve the quality of life for North Koreans.”

The South Korean government went on to insist human rights are part of the unfolding diplomatic process with North Korea, but Human Rights Watch Executive Director Kenneth Roth was not satisfied with that answer:

“The [Pyongyang] Joint Declaration of September contains numbers of agreements on inter-Korean exchanges and easing military tensions. If the agreements are well carried out, it will contribute to not only the improvement of inter-Korean relations and peace settlement on the Korean peninsula but also the improvement of human rights of North Korean people,” the message said.

Roth called Moon’s focus on denuclearization and closer economic relations “naive and short-sighted.” He called for Moon to “stop hiding behind the denuclearization talks as an excuse, never to talk about human rights.”

Roth told Reuters he was deeply frustrated with dictator Kim Jong-un’s reticence to engage the issue because addressing sexual abuse would pose no threat to his power, it would raise his stature in the international community, and it would help North Korea open its economy to the outside world as Kim desires.

“This is not a regime-threatening issue, so that is why it is particularly appalling that the government is not doing anything to prevent sexual abuse by officials,” said Roth.

“Ironically, many of the women who are at the center of the economic opening that Kim says he cares about are the most at risk,” he added.