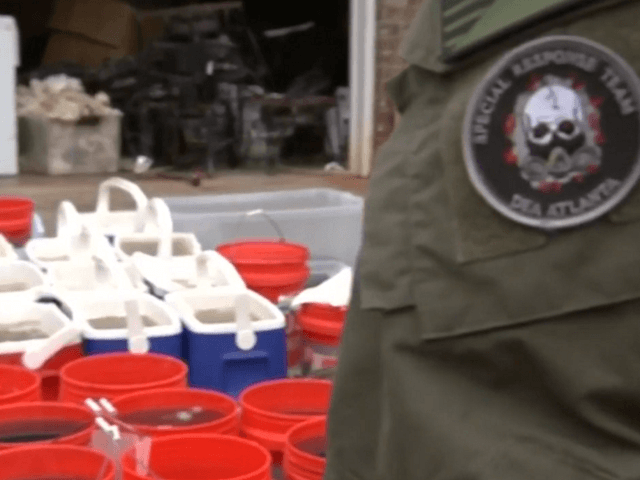 DEA Special Agent in Charge Robert Murphy told Conservative Review that his office busted a methamphetamine lab run by the Cartel Jalisco Nueva Generación (CJNG) in an affluent suburb near Atlanta. He called the operation “huge and sophisticated.”

“We knew they were in the process of making a major cook and it was going to hit the streets,” Murphy told the reporter. “We had no idea we were going to find the size and sophistication of what we found. They were taking the liquid meth that had crossed over the border in Texas and converting it back into solid meth.”

“Only one person was in the country on some sort of legal status, and they were all working for (CJNG),” the DEA agent explained. “Mexican nationals absolutely control the entire methamphetamine smuggling process, and it’s all coming from the border – from the smuggling and the processing and the initial distribution all the way through the mid-level of trafficking.”

“There’s a nonstop flow of illegals willing to make the trip over for the amount of money they are going to earn from the cartels,” he stated.

Murphy called the operation an “unbelievable size lab.” He said they recovered more than 400 pounds of finished product.

“These were people who came from Mexico educated on how to do it,” Murphy continued. “The cartels don’t trust some low-level people with that amount of product. They got the training in Mexico and did the same thing here and were brought here for that purpose.”

From court documents regarding a massive Mexican cartel-connected meth ring busted in Oregon, Darby reported that 24 defendants were charged and that many of them were illegally in the country. The case highlights that “Mexican cartels are manufacturing meth on U.S. soil — not just importing the substance any longer.”

Breitbart News’ Border/Cartel Chronicles reports extensively on the Mexican drug cartels and the violence they bring to their communities. Articles also include extensive coverage of other drug trafficking operations.

What we see here in Atlanta and we know pretty much the same in the whole southeast, 100 percent of the meth trafficking is controlled by the cartels – every point, from the production in Mexico, the crossing into the U.S., the conversion for crystal meth sale here, the high level of distribution, and then the actual collection of proceeds, and then back into Mexico. Predominantly, what we arrest here is illegal aliens.

Read more on this case at Conservative Review.