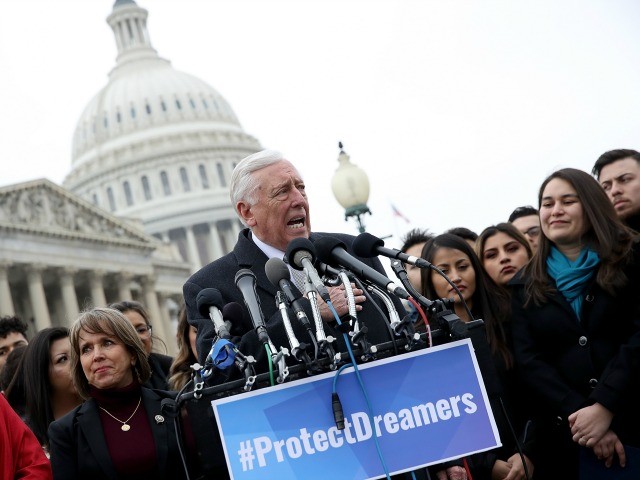 House Minority Whip Steny Hoyer (D-MD) promised immigration activists on Monday that Democrats will bring an amnesty bill to the House floor to give DREAMers the protections they “deserve” in the next Congress “as early as possible.”

Hoyer, who will become his party’s Majority Leader in the next Congress, spoke at the National Immigrant Integration Conference in Virginia and said he will be working “to move legislation that would provide DREAMers with the relief they deserve and a permanent pathway to citizenship” in addition to protecting those with Temporary Protected Status (TPS).

“There are few certainties in our politics these days. But one thing that is certain is that as Majority Leader in the next Congress, I will bring legislation to the Floor that addresses our immigration challenges,” Hoyer said to cheers.

After Democrats took back the House, Pelosi, who advised Democrats not to get in fights with Trump on immigration so they could win their respective races in swing districts, said Democrats could now talk about a broader comprehensive amnesty bill. In addition, Pelosi revealed that she will prioritize amnesty for “patriotic” Deferred Action for Childhood Arrivals (DACA) recipients in the next Congress and said she will not trade border-wall funding for a permanent DACA fix in this week’s short-term budget negotiations.

Hoyer’s remarks indicate that House Democrats are planning to go big on amnesty legislation in the next Congress and, in Hoyer’s words, leave it up to “Senate Republicans and the president to decide whether to work with” them on “keeping DREAMers and TPS holders here or stand in the way of what’s right.”

“I hope they choose to work with us,” Hoyer said of Senate Republicans and Trump. “And I know all of you will be helping to remind them why they should.”

“The era of Donald Trump and his allies controlling all the levers of our government will soon be over. And Democrats are ready to fight back for the values and principles this nation has always represented,” Hoyer added. “We won the Majority on a platform of holding this administration accountable and working to grow opportunities for all Americans… Our majority will pursue oversight rigorously, because the American people deserve to know what their government is doing in their name and whether their officials are upholding not only our laws but our values.”