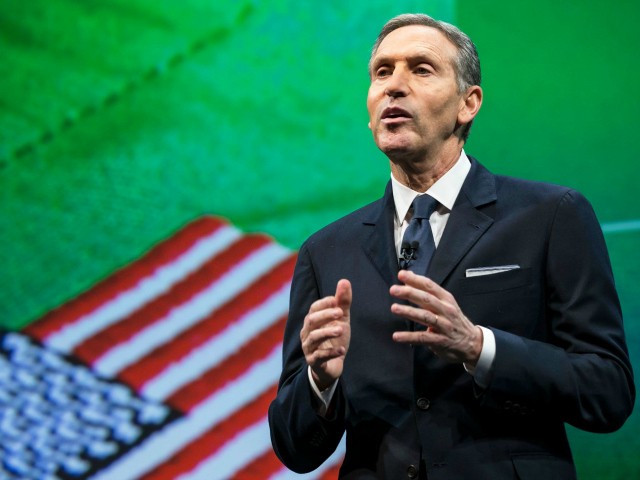 Former Starbucks CEO Howard Schultz got heckled minutes into his Monday evening book event at a New York City Barnes & Noble, days after he first announced he would seriously consider entering the 2020 race as a “centrist independent.”

Here’s the video. A heckler shouts at Howard Schultz during an event in New York: “Don’t help elect Trump, you egotistical, billionaire asshole.” Via CNN pic.twitter.com/oabwfNnsmp

Schultz was in the middle of explaining what it means to be “an independent” when the heckler began shouting, claiming he would be a spoiler candidate who would “help” re-elect President Donald Trump.

“Don’t help elect Trump, you egotistical billionaire asshole!” the heckler shouted. “Go back to getting ratioed on Twitter. Go back to Davos with the other billionaire elite who think they know how to run the world!”

Several people booed the heckler, who was escorted out by security. But other hecklers took his place.

Schultz, who held the event at the Manhattan Barnes & Noble to promote his book From the Ground Up, announced in a Sunday evening interview with CBS’s 60 Minutes that he was “seriously thinking of running for president” as a “centrist independent” in 2020.

Since the former Starbucks CEO made his presidential ambitions known, Democrats grew increasingly worried that Schultz would split the vote and give Trump a path to re-election in 2020.

Trump dismissed Schultz’s potential 2020 bid, tweeting that he “doesn’t have the guts” to successfully run for president.