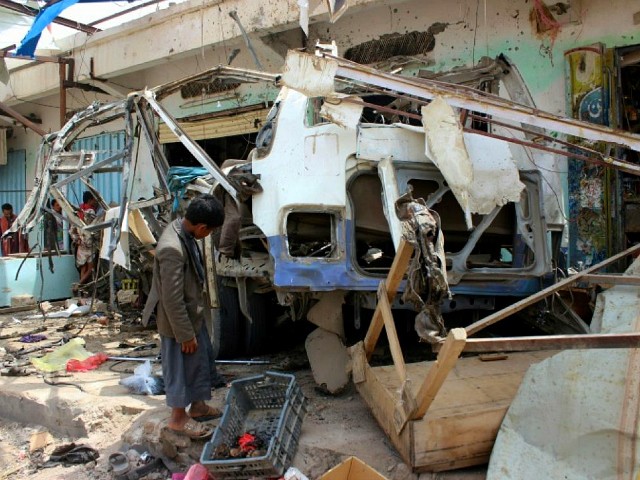 A court in the province of Sa’ada in Yemen issued death sentences on Thursday for ten prominent individuals, including U.S. President Donald Trump, for their supposedly criminal involvement with a 2018 air raid that reportedly killed 43 people, including 29 children.

The airstrike on August 9, 2018, was conducted by the Saudi-led coalition that intervened on behalf of the internationally-recognized Yemeni government against the Houthi insurgency. The Saudi coalition said the strike was targeting rebels who launched a deadly missile attack into southern Saudi Arabia the previous day.

Saudi officials said the airstrike was directed against military targets near the Dahyan Market in Sa’ada, a known Houthi stronghold near the Saudi border. A bus full of civilians was hit during the strike. The International Committee of the Red Cross said one of its hospitals received the bodies of 29 children killed in the attack, plus 30 more injured children. The Saudis accused the Houthis of deliberately using the civilians as human shields for its military assets, while the Houthis accused the Saudis of perpetrating a war crime.

The Saudi coalition investigated the Dahyan Market strike, plus two other controversial military actions, in February 2020 and began court-martial proceedings against the aircrews involved.

Hadi has been living in Saudi Arabia since the Houthi insurgency captured the capital city of Sanaa; the Houthi court referred to him as a “fugitive criminal.”

In addition to the death sentences, the defendants were sentenced to pay ten billion dollars in fines to relatives of the people killed in the 2018 attack. The American officials were linked to the case by way of U.S. arms sales to Saudi Arabia.

Notwithstanding the Houthi court decision, last week saw a little guarded optimism that an end to the long and bloody Yemeni civil war could be in sight, as the warring parties agreed to exchange over a thousand prisoners. The United Nations described the prisoner exchange as a “rare” achievement that could lead to negotiations for a ceasefire.

“The aim behind this agreement is purely humanitarian. It will also establish a solid base for dialogue and for reaching a comprehensive political solution,” Saudi military spokesman Col. Turki al-Maliki said when the exchange was announced.