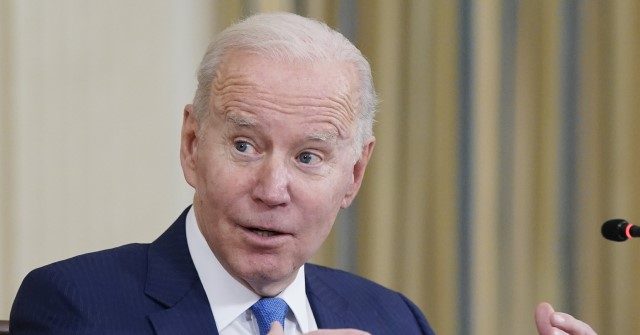 “Everything you need to kick off Super Bowl weekend just got more expensive. Biden and House Democrats teamed up to create skyrocketing inflation,” the ad narrator explained. “Joe Biden’s inflation is intercepting your paycheck.”

The ad lists the percentage cost increases of the foods fans often buy for watching the big game:

After the NRCC released the ad, the committee’s spokesman, Mike Berg, said in a statement, “Bidenflation is intercepting Americans’ paychecks. Inflation is the Super Bowl party guest nobody asked for.”

The ad comes as CNN published an article earlier this week claiming that Super Bowl parties “will be much more expensive this year” because of inflation. Depending on what is served, Wells Fargo indicated that the overall cost of parties could be 14 percent higher than last year.

“Consumer sentiment plunged in the early weeks of February as consumers lost faith in the Biden administration’s economic policies,” Breitbart News’s John Carney wrote on Friday. “Inflation rose to the worst level in 40 years, and the long-term economic outlook of American households fell to its least favorable level in a decade.”