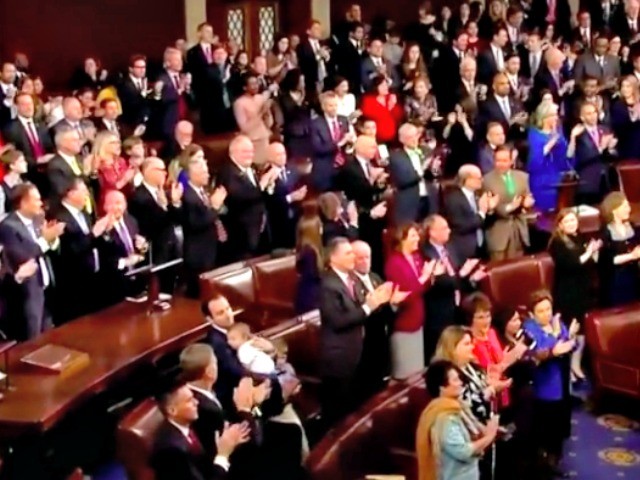 The U.S. House of Representatives on Wednesday gave victims of illegal alien crimes a bipartisan standing ovation on the floor of the chamber as House Minority Leader Kevin McCarthy read out the names of Americans killed by illegal aliens in a lengthy speech.

McCarthy began his speech bashing House Speaker Nancy Pelosi’s strategy on the government funding battle that has protected the “status quo” on immigration, a system that has led to serious consequences for American citizen victims of illegal immigration.

McCarthy said on the House floor:

At a time when the country expects its leaders in Washington to look forward, this House majority is looking backward. When our country expects solutions, they are using this chamber to settle political scores. As hundreds of thousands of Americans painfully experienced, portions of our federal government were shut down for 35 days. A shameful record under this majority’s watch. It was a shutdown that never had to happen.

McCarthy continued by recounting how the shutdown happened in large part due to obstruction from Pelosi and Senate Minority Leader Chuck Schumer. He also walked through how President Donald Trump made a number of concessions and offers to Democrats to have an honest deal to end the shutdown and secure the border with a wall along the border but Democrats rejected them every time:

After the President signed a three-week continuing resolution the Speaker gloated with a Presidential-style enrollment ceremony. Democrats marveled at her exercise of raw political motivation. And many in the media responded like they were beat reporters for their hometown team. This all sounds like a historic moment! What exactly was everyone celebrating? Nothing.  They were celebrating achieving nothing. They were celebrating a status quo that suits their political interests and personal pursuits of self-righteousness. A status quo that causes pain and suffering for Americans across this country.

From there, McCarthy walked through the statistics of American victims of illegal alien crimes and the effects that an insecure border has on the American public:

There have been 266,000 criminal aliens arrested the last two years. This includes charges or convictions of 100,000 assaults, nearly 30,000 sex crimes, and 4,000 violent killings. Three hundred Americans die every week from heroin. And More than 90 percent of heroin comes across the Southern border. And roughly 10,000 children are being smuggled into the U.S. every year to be sold for human trafficking.

McCarthy called it “zero sum politics,” and lamented how in Washington, D.C., “nothing ever changes.”

“Well I’d like to spend some time and reflect on Americans and their families who might not have been celebrating the status quo preserved by this majority,” McCarthy said.

At that stage, McCarthy then began reading off 50 names of Americans who were killed by illegal aliens–including many police officers. It was during McCarthy’s reading of these names that the powerful moment happened on the House floo, in whih all Republicans and all Democrats present–approximately 60 members in total, as the full House was not present for this speech–stood in unison, along with their staff members with them on the floor and people watching from the gallery–giving the Americans slain by illegal aliens a bipartisan standing ovation from the full House of Representatives.

“All members on the floor–both Republicans and Democrats–rose and solemnly stood as McCarthy read the victims’ names one by one,” a senior GOP aide who was on the floor at the time and witnessed the powerful moment told Breitbart News. “Even onlookers from the gallery joined. It was a very emotional and powerful moment.”

McCarthy was the GOP Speaker, and as he gave this speech, the House was split between Republicans and Democrats among the approximately 60 members present at about even, the GOP staffer present on the floor told Breitbart News, though as it went on there were more Republicans than Democrats there.

Rep. William Lacy Clay (D-MO), a Democrat and top member of the Congressional Black Caucus, was managing the floor for the Democrat majority in the House and, according to the senior GOP aide who was present, joined in with everyone else, including all the Democrats, Republicans, and staff present in standing to honor the Americans killed by illegal aliens.

Here is a full list of the 50 names that McCarthy read out on the House floor:

And here is video of McCarthy’s full House floor speech posted by the Minority Leader’s office:

“These are just 50 names of Americans whose lives have been lost to illegal immigration,” McCarthy said after he finished reading their names. “They no longer have their voice. But we can and must be their voice today.”

McCarthy also read off the names of various so-called DREAMers whom he says should be upset because the Democrats have refused to make a deal with President Trump–and then he rounded out his speech saying that he implores Congress to consider the impact that its refusal to solve the problem once and for all has on all Americans and the broad effect that congressional inaction causes.

“Mr. Speaker as this House adjourns for the week today — after just one rule bill — I implore my colleagues to take some time and think deeply about these individuals, their families, and what our country stands for,” McCarthy said. “It certainly isn’t this political stunt by this majority and it certainly isn’t the status quo they are so proud to protect. As members of the U.S. House of Representatives we are a very small group with a very large responsibility. The burden on us 435 Americans is to represent 325 million Americans faithfully. To work together so that tomorrow is better than today. Let us not let these political distractions get in the way of our duty. Instead – lets actually get to work.  ”