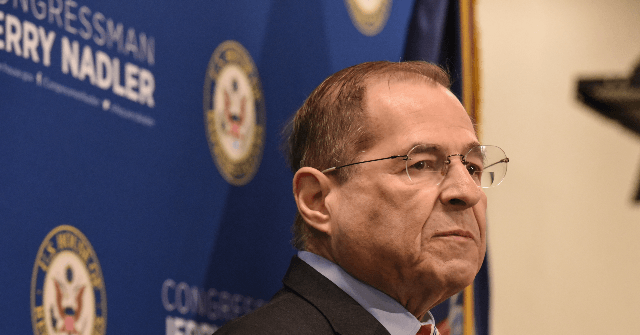 House Judiciary Committee Democrats will hold a hearing Monday on the Robert Mueller report, “presidential obstruction,” and other crimes.

The House Judiciary Committee, led by chairman Jerry Nadler (D-NY) will hold a hearing on Monday at 2:00 p.m. EST on the Mueller report, “presidential obstruction,” and other crimes.

“No one is above the law. While the White House continues to cover up and stonewall, and to prevent the American people from knowing the truth, we will continue to move forward with our investigation,” Nadler said in a statement this week, announcing the hearing, entitled, “Lessons From the Mueller Report: Presidential Obstruction and Other Crimes.”

The hearing will include testimony from former White House counsel John Dean, who was a key figure in the Watergate hearings that led to Richard Nixon’s resignation. Dean cooperated with the Watergate special prosecutor after pleading guilty to obstruction of justice.

These hearings will allow us to examine the findings laid out in Mueller’s report so that we can work to protect the rule of law and protect future elections through consideration of legislative and other remedies. Given the threat posed by the president’s alleged misconduct, our first hearing will focus on President Trump’s most overt acts of obstruction. In the coming weeks, other hearings will focus on other important aspects of the Mueller report.

Nadler tried and failed to get Mueller to testify before the committee, especially as he has claimed that both President Donald Trump and Attorney General William Barr have been lying about potential obstruction of charges and collusion charges.

Mueller said last week that the report he created for the Department of Justice, which shows that Trump or his campaign did not collude with the Russian government “speaks for itself.”

“I would not provide information beyond what is already public in any appearance before Congress,” Mueller explained.

Nadler said that after Mueller completed his investigation, the onus falls on Congress to continue the former special counsel’s work.

“Russia attacked our elections to help President Trump win. Trump and his campaign welcomed this help, and the president then tried to obstruct the investigation into the attack,” Nadler suggested. “Mueller confirmed these revelations and has now left Congress to pick up where he left off.”