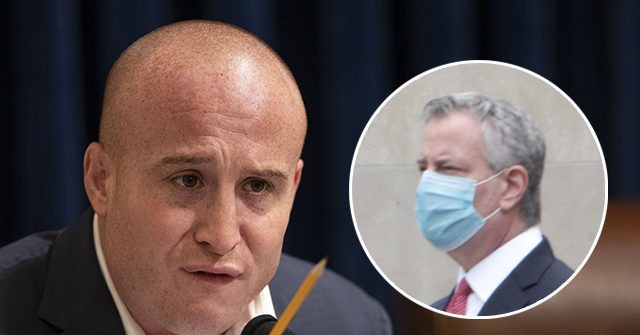 Rep. Max Rose (D-NY) of New York’s Staten Island declared that Mayor Bill de Blasio (D) has lost control of the city’s streets and called for the deployment of the National Guard to assist with enforcing Tuesday’s 8 p.m. curfew.

Rose said in a statement that the “majority of the protests yesterday were peaceful,” but he acknowledged the “mayhem that occurred in parts of the city last night—the unprecedented looting and attacks on officers and bystanders.”

“It was not part of the movement to ensure justice for George Floyd and other victims of police brutality. And anyone who would say so is being dishonest at best,” he continued before taking aim at de Blasio directly.

“Last night demonstrated that the Mayor has lost control of [the] situation once and for all. If we are going to enforce an 8:00 p.m. curfew tonight, then the National Guard must be deployed to assist with that and that alone,” he said.

“The NYPD and New York City mayor did not do their job last night,” Cuomo said, just hours after criticizing the president’s calls for law and order.

“I think the Mayor underestimates the scope of the problem and the duration of the problem. What happened in NYC was inexcusable,” Cuomo continued.

“My option is displace the mayor of New York City and bring in the National Guard as the governor in an emergency and basically you would have to take over the mayor’s job,” he added.

Feels like a very organized effort tonight – kids have turned up with hammers and big bags, they have spotters on the corners and cars ready to go. Group of about 500 kids now running up Fifth Ave looting whatever they want pic.twitter.com/vP97YCLis7

The Nike store on the corner of 20th Street and 5th Avenue was just looted by protesters. #NYCProtest #GeorgeFloyd pic.twitter.com/F8DP6GvseX

“Today, I have strongly recommended to every governor to deploy the National Guard in sufficient numbers that we dominate the streets,” Trump said during Monday’s Rose Garden address.

“Mayors and governors must establish an overwhelming law enforcement presence until the violence has been quelled,” he added.

Trump continued in his calls on Tuesday.

“New York City put on an 11:00 P.M. CURFEW last night. No wonder they ripped the place apart. Should be 7:00 P.M. CALL UP THE NATIONAL GUARD,” Trump said, adding the hashtag, #SAVENYC:

NYC, CALL UP THE NATIONAL GUARD. The lowlifes and losers are ripping you apart. Act fast! Don’t make the same horrible and deadly mistake you made with the Nursing Homes!!!

New York City put on an 11:00 P.M. CURFEW last night. No wonder they ripped the place apart. Should be 7:00 P.M. CALL UP THE NATIONAL GUARD. #SAVENYC