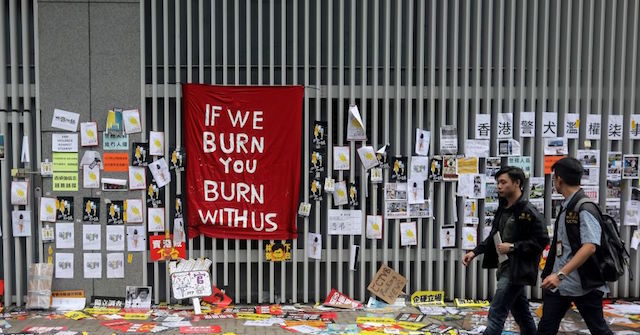 Police in Hong Kong announced early Thursday they had arrested 12 people in connection to the wave of anti-China protesters that destroyed the Legislative Council (LegCo) headquarters on Monday, shattering its exterior and spray-painting the legislative floor with anti-China slogans.

Authorities also arrested another eight people for the online publication of the names and personal information of hundreds of police officers this week and promised they would arrest dozens more identified as having participated in the LegCo siege.

The arrests follow days of pressure on Hong Kong’s government from the Chinese Communist Party to show “zero tolerance” for the protests against Beijing that have attracted millions in the city in the past month.

At their peak, the protests attracted 2 million of the city’s 7 million people in June. Citizens expressed outrage that the Chinese government was violating the agreement that it made with the United Kingdom when the latter handed over the city’s administration to the Communist Party in 1997. Under the “one country, two systems” policy, China is banned from imposing communist law on the city. This month, the Hong Kong legislature – which is not elected by the people – introduced a bill that allowed for the extradition of anyone, not just Hong Kong citizens, to China if Beijing accused them of violating communist law.

The protesters expressed fear the law would allow China to arrest and extradite Hong Kong residents into Chinese territory for “crimes” such as criticizing communism or worshipping outside of the Communist Party’s five official faiths: Catholicism, “Patriotic” Christianity, Islam, Buddhist, and Taoism.

Following violent police action against protesters in June, Hong Kong chief executive Carrie Lam tabled the extradition bill, which would allow her to revive it at any time. Protests grew, demanding that the bill permanently disappear from the legislature and demanding apologies from Lam and the police for their violence against protesters and disparaging them as “rioters.”

While the Chinese government has repeatedly referred to the legislature siege as violent, the protesters did not attack anyone and made sure to preserve the legislature’s historical artifacts, destroying what lawmakers would need to pass the extradition law.

As of Thursday, 12 people – 11 men and one woman – were in police custody in relation to the incident, the Hong Kong Free Press (HKFP) reported. The oldest among them is 36 years old and at least one minor, a 14-year-old, is also under arrest. Among the charges levied against them, according to HKFP, are “unlawful assembly, assaulting a police officer, obstructing a police officer, possession of offensive weapons, contravening the Air Navigation (Hong Kong) Order 1995 and failing to carry identity documents.”

Police also acted against eight people believed to be involved in the publication of personally identifying information tied to as many as 600 police officers. The information appeared online in late June, as the protests against China grew, and resulted in many of the officers targeted receiving anonymous threats to themselves and their families, the South China Morning Post reported. Two of the eight arrested were women, and one was identified as a schoolteacher. Among the arrested were also some accused of threatening police officers and calling for violence online.

“Our experts will collect fingerprints from the evidence and carry out DNA tests on the evidence such as face masks,” an officer told reporters, who the government finally allowed to tour the LegCo complex on Wednesday to take photos of the damage. The Global Times, a Chinese Communist Party newspaper, published a photo essay allegedly showing “key equipment” for running the government had been destroyed. Many of the images showed mounds of garbage and graffiti reading slogans like “Hong Kong is Not China.”

China is using the Global Times to threaten the pro-democratic movement in the city. The newspaper featured reports boasting of the large military presence in around Hong Kong on Tuesday in a thinly-veiled attempt to threaten protesters with retaliation. The People’s Liberation Army (PLA) held a three-day “open house,” the Times reported, aimed at helping “promote patriotism and military security education to a Hong Kong people, particularly for the city’s youth.” Patriotism for China among Hong Kong’s young people is at record lows; a recent survey found that 90 percent of Hong Kongers aged 18-29 were not proud of their Chinese citizenship.

The Global Times lamented on Thursday the rejection of communist principles the protests represent will result in a major economic decline for the city.

“Hong Kong’s economy will be badly hit by radical activists who have caused tangible damage to the city’s economic recovery. They and the power behind them are sinners against Hong Kong’s economy,” the newspaper predicted. “Hong Kong society should stand up against riots that seriously damage Hong Kong’s wellbeing and future.”

It went on to threaten that Chinese companies, all of which answer to the Communist Party, will stop investing in the city in response to the protests, and accuse the United States of “instigating and lending strong psychological support to violent protests around the world.”