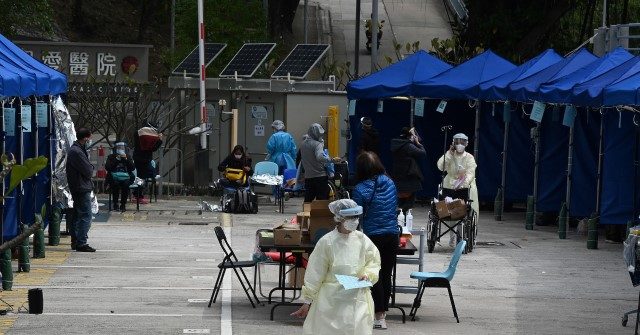 “The city [of Hong Kong] faces its worst coronavirus outbreak with more than 2,000 cases reported a day before,” the news site observed on February 15.

“Thousands of infected people are also waiting at their homes to be admitted to hospitals or other isolation facilities,” according to the media outlet.

Lam predicted the converted apartments would admit up to 3,000 Chinese coronavirus patients. She said the city was set to lease the newly built public housing units to renters, but the Hong Kong government will now make “an appropriate arrangement” with people due to move into the buildings.

Hong Kong is a former British colony that returned to Chinese rule in 1997. The city enjoyed limited freedoms in the wake of the power transfer, as it was negotiated to allow Hong Kong to operate according to a “One Country, Two Systems” policy. The Chinese Communist Party has increasingly defied the terms of this agreement since 2019 when it launched a political crackdown on Hong Kong.

The action prompted a backlash among pro-democracy activists in Hong Kong, who sparked a protest movement that gained momentum in the summer of 2019. In response, the Chinese Communist Party’s rubber-stamp legislature passed a “National Security Law” on June 30, 2020, and enforced it in Hong Kong that same day. The legislation created four new crimes — subversion, secession, terrorism, and collusion with foreign forces — which were “broadly defined.” Soon, the Hong Kong Police Force began arresting pro-democracy protesters and charging them with these new National Security crimes, effectively shutting down the once-powerful movement.

Hong Kong’s government has continued to shift toward a largely pro-Chinese Communist Party stance since the National Security Law’s passing in the summer of 2020, with the city’s public health policies reflecting this change. Hong Kong is currently pushing for a “zero-COVID” policy, as is already observed in China, that aims not to live with the Chinese coronavirus, but to stamp out every single new case of the disease.