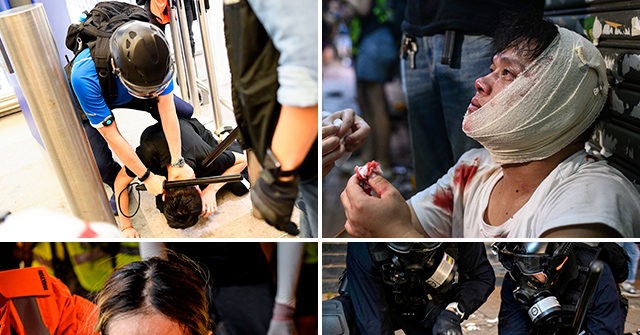 Hong Kong’s embattled chief executive Carrie Lam lashed out against the immense protest movement on Tuesday, accusing “hard-hearted” demonstrators of using “hate speech against the police” and trying to “push the city into the abyss of destruction.”

Lam told the weekly meeting of her Executive Council advisers that the city has “descended into panic after witnessing massive scale destruction, which has paralyzed the airport, blocked, the tunnel, and injured police officers,” according to China’s state-run Global Times.

“My responsibility as chief executive is to ensure that Hong Kong remains a safe, orderly, and law-binding city,” Lam told the Executive Council. “Without the rule of law in Hong Kong, 7 million people cannot live in a peaceful manner. That requires my support for law enforcement.”

The Global Times lamented that Lam was “continually interrupted by Hong Kong and Western media reporters” at a subsequent press conference where she defended the police against charges of using excessive force against peaceful protesters.

“We have heard a lot of hate speech against the police,” she claimed at the contentious presser. “This is not beneficial to Hong Kong at all. The 30,000-strong police force is the pillar of the rule of law in Hong Kong.”

One of the main reasons the press conference became so heated is that Lam’s police opened fire on protesters at several train stations and the airport on Sunday using non-lethal ammunition. One of their shots struck a young female medic in her right eye and ruptured it. The eyepatch she now wears has become a symbol of democratic resistance across Hong Kong and groups of fellow medical staffers are joining the protests.

Lam enraged some attendees of her Tuesday press conference by insinuating the reports of police brutality were somehow exaggerated, giving unqualified support to commanders in the field, and hoping the injured medic will “report the case to the police, or she could talk to me.”

“When it is convenient, I am very willing to visit this young girl,” she said.

Lam also defended the controversial practice of disguised police officers infiltrating the protests, a tactic she said was necessary to arrest “core extreme protesters.” Critics have accused the infiltrators of provoking some of the violence that was used to justify an aggressive police response.

“You can’t say the police were doing something wrong,” she said, although a lot of Hong Kongers are saying exactly that.

Lam worried the protest movement, which has grown strong enough to shut down the international airport for two consecutive days and paralyze parts of the city, would damage Hong Kong’s “reputation as a safe society that respects the rule of law.”

“Hong Kong, as an open, free, inclusive, and economically stable city, will also suffer from all kinds of problems,” she said, predicting the damage could take a long time to repair.

Lam’s attitude did not go over well with reporters, opposition leaders, or protesters outside the press conference, as the Hong Kong Free Press reported:

As she urged the public to rethink the current situation, Lam appeared to be emotional.

“Are you cold-hearted enough to push Hong Kong into this deep abyss that will crush us?” she said.

Journalists shouted questions including “many residents asked you when will you die?” “So you have a conscience?” when Lam left, without receiving an answer.

Members of the League of Social Democrats protested outside the meeting. Some covered their right eye in mock blood in protest.

“Long Hair” Leung Kwok-hung, the party’s former lawmaker, said Carrie Lam failed to set up an independent commission of inquiry to investigate what has happened since June, despite the idea receiving wide public support.

“Do you even have a conscience?” Leung asked Lam when she entered the chief executive’s office.

Lam once again brushed aside calls for her resignation, insisting she will remain in office and “will be responsible for rebuilding Hong Kong’s economy, for engaging as widely as possible, for listening as attentively as possible to my people’s grievances, and trying to help Hong Kong move on.”

Lam implied she does not have the authority to meet a key protest demand and permanently scuttle the extradition bill that launched the protest movement and was evasive about whether she is acting under orders from Beijing, which her critics took as strong evidence the mainland Communist Party is calling all the shots in Hong Kong.

“She didn’t dare to refuse such a claim,” said opposition lawmaker Claudia Mo. “I have to take it as a clear indication that she is seriously reduced to a puppet form of government.”

Another lawmaker, Gary Fan Kwok-wai, accused Lam of “weeping crocodile tears” for injured demonstrators and said, “The only way to stop violence is Lam responding to the demands of protesters.”

The BBC noted Lam’s comments at the Executive Council meeting and press conference precisely matched those of mainland Communist officials, including her rhetoric about the city teetering on the edge of a “bottomless abyss.”