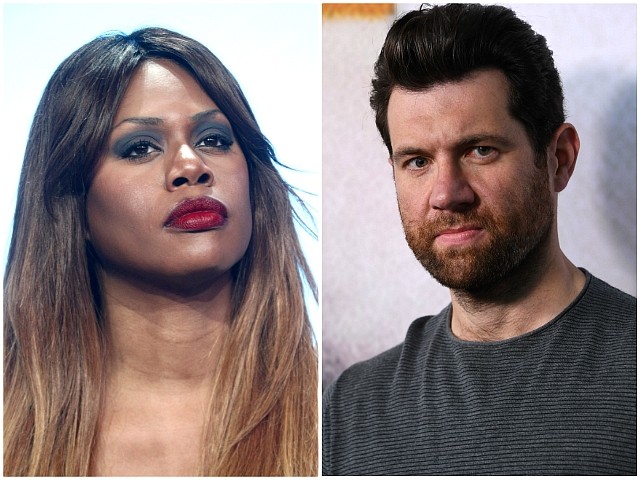 Hollywood celebrities are taking to Twitter to bash the Trump administration in the wake of a New York Times report that states the administration may eliminate gender ideology and officially return to legally identifying individuals as biological “males” or “females.”

“This is pure evil,” tweeted Billy Eichner, host of Billy on the Street. “Get your friends together and vote like our lives depend on it. Because they do.”

This is pure evil. Get your friends together and vote like our lives depend on it. Because they do. https://t.co/mri7fM62Dh

Trans actor Laverne Cox told Variety that “Besides nuclear war and our president being an agent of Russia? For the trans community, with our previous president so much progress really happened, and most of the progress has been rolled back.”

Comedienne Kathy Griffin tweeted a link to a thread by Media Matters’ Parker Molloy, who posted, “Lots of people asking what they can do to fight back against the Trump administration’s planned anti-trans actions. The answer, honestly, is to elect Democrats.”

On Instagram, actress Ellen Page of Juno said what the Times reported is “horrible,” and that it reflected “hatred and cruelty.”

“We need to protect the rights and humanity of trans people,” she said.

Actress Mia Farrow and comedienne Bette Midler also called for political action against identifying people using the common-sense notion based on biological fact that people are either “male” or “female.”

If you agree that we cannot let this happen, call your representatives. Senate switchboard is (202) 224-3121. An operator will connect you directly with the Senator or congressperson’s office you request. https://t.co/S50dfy5lSG

Ooooh, here’s today’s #TINY distraction! There’s transgenders among us,! SURPRISE! and #dumbkopfTrumpkopf wants to make sure… well he’s not sure what, but he’ll figure it out soon! Meanwhile the world is coming under siege from murderers, plunderers like him. VOTE 2018

Actor James Woods, however, praised the notion of legally defining a person’s sex based on the science of biology, rather than “personal mythology.”

This bunch must be happy Trump is having the legal definition of a person’s sex to be based on biology, not personal mythology. pic.twitter.com/F23DZL2hww

The Times report said such a change would “roll back” civil rights protections for those who claim their gender identity is incompatible with their biological sex.

The report continued the action “would be the most significant of a series of maneuvers, large and small, to exclude the population from civil rights protections and roll back the Obama administration’s more fluid recognition of gender identity.”

In a statement sent to Breitbart News, however, Caitlin B. Oakley, national spokesperson and senior advisor in the office of the assistant secretary for public affairs at HHS, said her office does not comment “on alleged, leaked documents that purport to indicate the status of deliberations or the focus of the department.”

She continued, however, that “everyone deserves to be treated with respect and HHS’s Office for Civil Rights will continue to vigorously enforce all laws as written and passed by Congress, prohibiting discrimination in healthcare on the basis of race, color, religion, national origin, sex, age, and disability.”

Oakley explains as well that a federal court has already issued a nationwide injunction against the Obama administration’s definition of sex for Title IX.