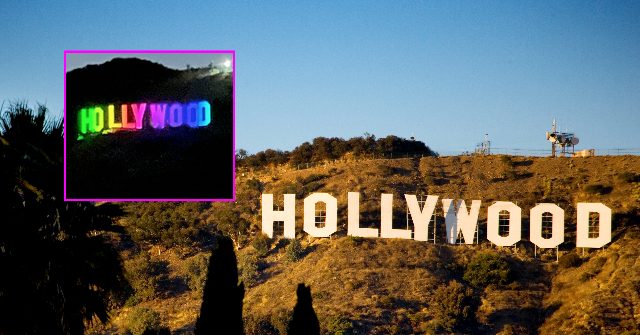 Angelenos were treated this Tuesday night to the first light show in over 20 years on the iconic Hollywood sign, where rainbow pride colors were prominently displayed alongside a variety of designs.

According to the Los Angeles Times, the sign featured “a variety of colorful designs, including a billowing rainbow, bright green, clear white, and other displays.” Since the city made no prominent announcement about the light show, onlookers attending a Halsey concert at the Hollywood Bowl were surprised when the sign suddenly sparkle in the darkness.

First time in 20 years they’ve lit up the Hollywood sign at night.
But not the usual white — a rainbow for #Pride pic.twitter.com/67Taw2RqHa

The Hollywood sign lit up last night after more then 20 years in honor of Pride Month. pic.twitter.com/vAXLhH10tB

This has been an entertaining half-an-hour watching the Hollywood Sign being lit up. pic.twitter.com/C0aoGuHrNY

The Hollywood sign has not been lit up since the year 2000 New Year’s celebration. During the sign’s early years, between 1923 and 1933, the sign was regularly illuminated when it was called “Hollywoodland.” The cost to maintain light bulbs eventually became too high and the sign was shut off.

“In the ensuing decades, the sign repeatedly fell into disrepair as it changed ownership multiple times,” noted the LA Times. “In 1944, the Sherman Company donated about 400 acres to the city of Los Angeles, which included the sign’s location. Five years later, the Hollywood Chamber of Commerce agreed to fix the sign, removing the word ‘land.’

Jeff Zarrinnam, chair of the Hollywood Sign Trust, told the Times in May that the city had to raise $250,000 in 1978 to rebuild the sign after it fell into disrepair.

During that time, a new lighting infrastructure was not installed. “That’s how it has remained ever since,” said Zarrinnam.