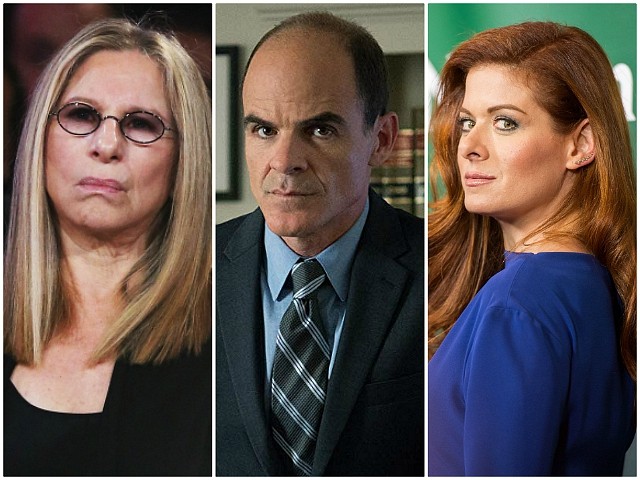 Several of the same Hollywood celebrities who posted Twitter screeds slamming Supreme Court Justice Brett Kavanaugh during his hellish confirmation process are now using their social media platforms to urge Americans to get registered to vote ahead of the November elections.

Many Hollywood figures were left devastated by Kavanaugh’s eventual confirmation as a Justice of the Supreme Court, after Dr. Christine Blasey Ford came forward with 35-year old uncorroborated allegations of sexual assault in what many believed were lodged in the hope that it would derail his nomination.

Hollywood elites consequently became part of an intense pressure campaign against Senators to vote against Kavanaugh’s confirmation on the grounds that he is a sexual predator, although such methods proved ineffective with the Republican moderates they hoped would cave into the pressure.

A crushing confirmation defeat last weekend left many of Hollywood’s far-left campaigners splitting with rage. Actors, such as Alyssa Milano, Barbara Streisand, Debra Messing, Sarah Silverman, Kumail Nanjiani, and Mark Ruffalo, have responded by urging their followers to register to vote before their state deadline, presumably in the hope that they will vote Democrat.

YO TEXAS!! Deadline to register to VOTE is TUESDAY. DO IT HERE: https://t.co/OXOEDFcbAB. And pass that shit on

Singer and actress Barbra Streisand suggested that the FBI investigation into Kavanaugh was a stitch-up because Republicans would not allow them to interview the right witnesses. A few days later, she was reminding her followers to register to vote.

The fix was in. The Republicans made sure we never saw Kavanaugh’s record from the White House, made sure the FBI never interviewed the relevant witnesses, and allowed Kavanaugh to lie repeatedly under oath. This is a national disgrace. https://t.co/znBoC7b5b7

Make sure you are registered to vote!! Many deadlines have already passed. Check your state and get out the vote! Go to https://t.co/mAYDA86FLA now if you haven’t registered yet. pic.twitter.com/3k17RaJBtC

Don’t let this performance fool you. If @SenatorCollins believed in #MeToo she would have opened the door when I was in her office to hear stories of constituent survivors.

TOMORROW (Tuesday, 11/9) there are FIFTEEN states with voter registration deadlines.

Put your resistance into action. #Vote

Actress Debra Messing said that the “morally bankrupt” GOP were knowingly putting a “subpar” and “unfit” judge into the Supreme Court. Then she implored Georgia voters to register to vote.

The @GOP and @WH are morally bankrupt. They knowingly put up a subpar, unfit judge for the HIGHEST COURT IN THE LAND and cheated to get him seated. Think about that. https://t.co/jkW6ETAdOw

You still registered to vote? You might not be.#YouCanChangeThis#RegisterToVote

Comedian Kumail Nanjiani encouraged his followers to register to vote only a couple days after he said they could “get even” with those who, presumably, voted for Kavanaugh’s confirmation.

Register to vote or check your status right now. Literally just do it literally right now. It’ll take no time. Everyone needs all of you. https://t.co/V9gPjnoV9H

Comedian Bill Eichner ragged on Sen. Susan Collins for her staunch support of Kavanaugh. Then the actor pushed voter registration.

Good on you @taylorswift13. Whether you have 1 follower or 100 million, now is the time to speak out and VOTE. https://t.co/dzhHo4y52e to register! https://t.co/sLp9NQ0Ysh

Actor and comedian Rob Delaney described Kavanaugh, without any evidence, as a “perjurer and a misogynist,” before unveiling his own fundraising effort for Democratic candidates.

I’m angry that the Senate will reward perjurer & misogynist Brett Kavanaugh with a lifetime appt to the Supreme Court. In an effort to flip this terrible Senate I’ve made this fund for Democrats in critical tossup races. Please give or give again: https://t.co/SimiGeUUEX

Film director Rob Reiner accused Susan Collins of turning her back on women who were “traumatized by sexual assault,” claiming that November has to be a Democratic “blue wave.”

Susan Collins turns her back on women who have been traumatized by sexual assault. Elections have consequences. To start turning the ship of state back towards the rule of law, decency, truth, and the preservation of Democracy, Nov.6 has to be a lot more than a blue wave. VOTE!!!

The vast majority of our country is progressive. If we had a pure representative Democracy, one person-one vote, the GOP would never be allowed to govern. Until we get rid of gerrymandering, voter suppression & the electoral college we have to swarm the polls. Nov.6 SWARM VOTE!!!

Bravo @SenatorCollins! You’ve shown my daughters that a woman can be every bit as craven as a man! You’ve really broken the glass floor. https://t.co/g8Ik93oBRF

Finally a privileged entitled white guy gets a win. I get that the majority of us a furious and sad but think about how great it’s gonna feel to vote every one of these victim shaming motherfuckers out! VOTE! Get your friends to vote! Volunteer! https://t.co/8Db5m4lLE7

House of Cards creator Beau Willimon said that the Supreme Court of the United States has become the “hijacked” court, calling on Democrats to vote with an “overwhelming” turnout.

4 out of 9 justices appointed by 2 presidents who lost the popular vote, one of which by obstructing a president who did win the pop vote, confirmed by a Senate wherein red states have disproportionate power.

SCOTUS is no longer the highest court.

SCOTUS is the hijacked court.

8. This is not an insurmountable challenge to overcome. But it means the majority must show up in a volume that even gerrymandering and voter suppression can’t stop. That’s the only way to loosen the GOP’s vice grip. We must VOTE with OVERWHELMING turnout.
/Thread

Film director Ava DuVernay described Kavanaugh’s confirmation as a “dark day in American history.” Then she urged her followers to verify and get registered to vote.

This dark day in American history has a light that shines brighter than the cowardly men and women who will put Kavanaugh on the Supreme Court. That light is Fannie Lou Hamer. Born on this day in 1917, her love and activism looms larger than their hate and treachery. pic.twitter.com/hF3y1AFLZt

Imagine. You think you’re registered, but you’ve been purged from the rolls. It’s happening. Purging tactics are another way to keep us from the ballot box. It’s SELMA all over again. Go to https://t.co/mc833kIfLc and quickly verify your voter registration status. Important.

Dear @GOP Senators,
You believe his testimony & not hers?
That’s on you.
You are ok with obvious partisan political bias?
I understand, not ok w/, but understand.
What I will never understand or forgive you for is that you are ok with his obvious lies, however small, under oath. pic.twitter.com/63mPWY8emm

To my Georgia friends and family! Tomorrow is the LAST DAY you can register to vote before the elections in November.

If you’re not registered yet, text WeAllVote to 97779 or go to https://t.co/YyiJbmIVPp to register to vote right now. #WhenWeAllVote @WhenWeAllVote

Countless Hollywood celebrities have involved themselves in “get out the vote” campaigns over the past year in hopes that it will draw high voter turnout and increase the chances of the Democrats taking back control of both houses of Congress.

In August, Breitbart reported that many of Hollywood’s most powerful and prominent figures are publicly supporting progressive Democratic candidates through a number of elite fundraisers. Those involved include the legendary director Steven Spielberg, late-night comedian Jimmy Kimmel, and super-producer Jeffrey Katzenberg.