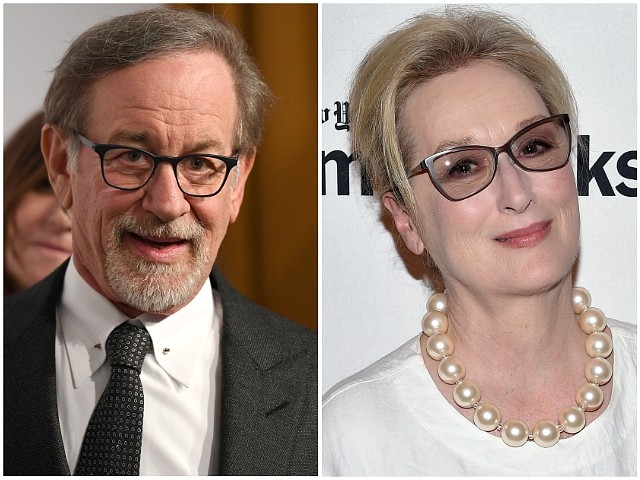 A new report reveals just how deeply Hollywood celebrities from Steven Spielberg to Jack Black are getting involved financially to help elect Democrats in the upcoming midterm.

The Jurassic Park filmmaker said last year that political divisions in America are as bad under President Trump as they were during the American Civil War.

“It is as vast a chasm as our nation faced before the Civil War. I’ve never seen anything like it,” Spielberg said.

The Senate Majority PAC also received donations from comedians Bill Maher and Seth MacFarlane to the tune of $1 million and $2 million, respectively.

Maher also called for a recession this year, with the hopes that it would take down President Trump. “I feel like the bottom has to fall out at some point, and by the way, I’m hoping for it because I think one way you get rid of Trump is a crashing economy,” Maher said.

“So please, bring on the recession. Sorry if that hurts people but it’s either root for a recession, or you lose your democracy,” he also said.

Actors Jack Black and Meryl Streep are also opening their wallets for Democrats, according to The Hill.

Streep and actor Jack Black each donated $10,000 in September to a joint fundraising committee that benefits Sen. Claire McCaskill‘s reelection bid, according to Federal Election Commission (FEC) data collected and analyzed by ITK.

Alec Baldwin also reportedly donated $2,700 to Liuba Grechen Shirley, who is running for the House of Representatives in New York.

Baldwin’s dislike of Trump is well-known. Apart from his weekly impression of him on SNL, Baldwin recently said at a recent Democratic Party event that he was “horrified” that Trump is president daily.

“I’m hoping that someone that isn’t necessarily clearly on the horizon right now would materialize because I don’t think anybody that’s a frontrunner now of the top six, seven, eight names that I’ve seen, I don’t think any of them is going to have an easy time of it,” he said.

The Hill also reported that Bette Midler gave almost $9,000 to the Democratic National Committee ahead of the midterm elections.

Midler recently made headlines for tweeting, then deleting, “‘Women, are the n-word of the world’ Raped, beaten, enslaved, married off, worked like dumb animals; denied education and inheritance; enduring the pain and danger of childbirth and life IN SILENCE for THOUSANDS of years. They are the most disrespected creatures on earth.”

She then apologized, saying, “The too brief investigation of allegations against Kavanaugh infuriated me. Angrily I tweeted w/o thinking my choice of words would be enraging to black women who doubly suffer, both by being women and by being black. I am an ally and stand with you; always have. And I apologize.”

The too brief investigation of allegations against Kavanaugh infuriated me. Angrily I tweeted w/o thinking my choice of words would be enraging to black women who doubly suffer, both by being women and by being black. I am an ally and stand with you; always have. And I apologize.

Midler also referred to President Trump as a “murderer” in a tweet this week.