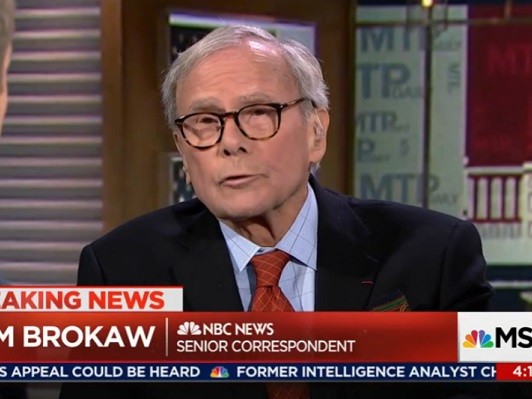 The National Association of Hispanic Journalists (NAHJ) ripped NBC’s Tom Brokaw on Sunday for an insufficient “apology” after Brokaw said that Hispanics needed to do a better job assimilating.

“The ‘sorry some Hispanics were offended’ apology tweeted by Tom Brokaw earlier this evening is not an apology at all,” NAHJ said in a statement. “It only further demonstrates Brokaw’s lack of understanding of what forced assimilation does to communities.”

NAHJ president Hugo Balta, who is also an MSNBC senior producer, said that “assimilation is denying one culture for the other.”

“Hispanics are no less American for embracing their country of origin or that of their ancestors,” Balta said. “Being bicultural and bilingual is a strength in an increasingly multi-ethnic, multilingual society.”

On Sunday’s Meet The Press, Brokaw claimed that a lot of Republicans do not want “brown” grandchildren and said he believes “Hispanics should work harder at assimilation.”

“And a lot of this, we don’t want to talk about. But the fact is, on the Republican side, a lot of people see the rise of an extraordinary, important, new constituent in American politics, Hispanics, who will come here and all be Democrats. Also, I hear, when I push people a little harder, ‘Well, I don’t know whether I want brown grandbabies,’” Brokaw said. “I mean, that’s also a part of it. It’s the intermarriage that is going on and the cultures that are conflicting with each other. I also happen to believe that the Hispanics should work harder at assimilation. That’s one of the things I’ve been saying for a long time. You know, they ought not to be just codified in their communities but make sure that all their kids are learning to speak English, and that they feel comfortable in the communities. And that’s going to take outreach on both sides, frankly.”

Brokaw first tweeted that he felt “terrible” that some of his “comments on Hispanics offended some members of that proud culture.”

After getting even more backlash from the left, Brokaw then claimed that his Twitter account failed him “at the worst time” and said he was “sorry, truly sorry,” that his comments “were offensive to many.”

i’ve worked hard to knock down false stereo types. in my final comment in Meet i said ALL sides hv to work harder

at finding common ground – which i strongly believe
dialogue not division

my twitter acct failed me at the worst time.
i am sorry, truly sorry, my comments were offensive to
many. the great enduring american tradition of diversity is to be celebrated and cherished. yamiche, thank u for your comments.
let’s go forward together.

finally, i am sorry – i never intended to disparage any segment of our rich, diverse society which defines who we are.

finally,i am sorry I failed to convey my strong belief that diversity – dynamic and inclusive is what makes America

great
Yamiche is a wonderful colleague and an important voice

i got your attention.