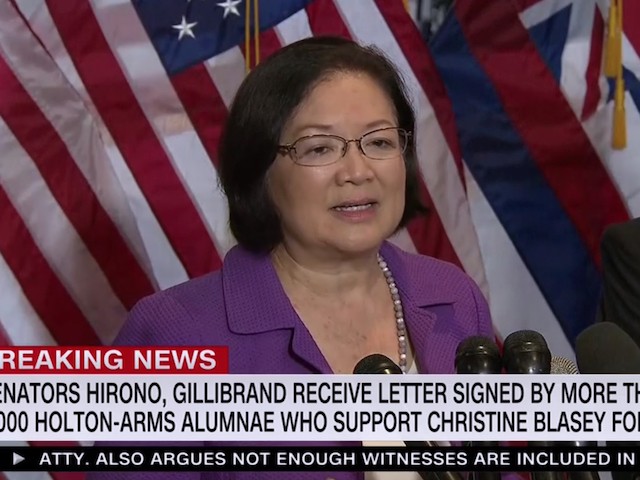 Thursday, Sen. Mazie Hirono (D-HI) asked, “why isn’t Judge Kavanaugh asking for an FBI investigation if he has nothing to hide” in light of the sexual misconduct accusations by Professor Christine Blasey Ford.

Hirono said, “This is what happens when the trauma of this kind of assault is so tremendous, they never talk about it. To hear these three friends of mine, as well as others who have contacted my office with their stories, brings tears to my eyes. It just goes to show how pervasive this is and how we have not created an environment where women like Dr. Ford can come forward and be supported in a respectful way. That’s not what is happening. What is happening with the Judiciary Committee is really, I would call it a railroad job. It’s totally unfair. The way I portrayed it and describe it, you have the entire force of the presidency and all of the supporters of Judge Kavanaugh in the Senate, a raid on one side and on this other side you have Dr. Ford who doesn’t even have the benefit of an FBI investigation as we all have called for.”

She added, “How unfair is that? That’s why I’m grateful that the leaders of her school are coming forward. They organized a letter drive to stand with Dr. Ford and they are going to have a few words to say in a couple of minutes, but this is not fair. I’m counting on the members of the press to point out that this is a fast track. They are totally intent on getting Judge Kavanaugh on to the Supreme Court come hell or high water. Come hell or high water. You have to ask yourself, why? Why isn’t Judge Kavanaugh asking for an FBI investigation if he has nothing to hide? You all should continue to press that point.”