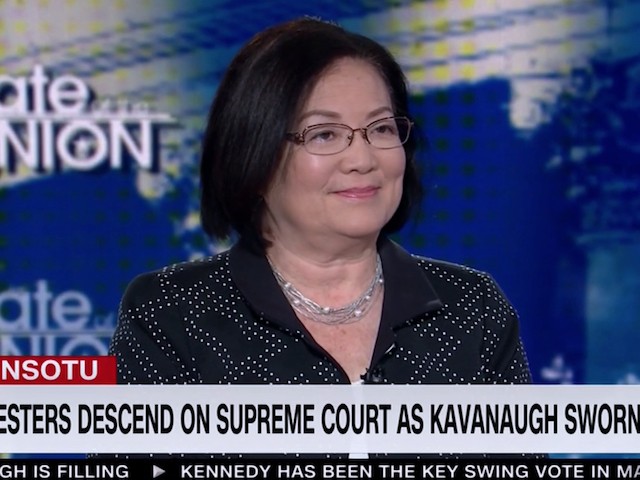 Sunday on CNN’s “State of the Union,” Sen. Mazie Hirono (D-HI) said protestors forcing U.S. Senators to leave restaurants, like Sen. Ted Cruz (R-TX) was justified “because when you look at white supremacists and all that.”

BASH: The president, Republicans are saying Democratic protesters are, quote, ‘an angry mob.’ What I want to ask you about, it is one thing to protest the Supreme Court at the Capitol. That’s been done for generations and frankly since the founding of this country.

BASH: It’s another thing to run senators out of restaurants and go to their homes. Is that going too far?

HIRONO: I think it just means that there are a lot of people who are very, very much motivated about what is going on. Because hat happened with Judge Kavanaugh from the very beginning, this is not a fair process. What the Republicans did was to telegraph after Dr. Ford’s account came forward, what they telegraph was, one, Dr. Ford, we don’t want to hear from you. Two, if we have to hear from you, we will rig the hearing —

BASH: Should they be going after people at restaurants?

HIRONO: This is what happens because when you look at white supremacists and all that, this is what’s coming forth in our country. There is a  tremendous divisiveness in our country. This is the kind of activism that occurs and people make their own decisions. If they violate the law, then they have to account for that.