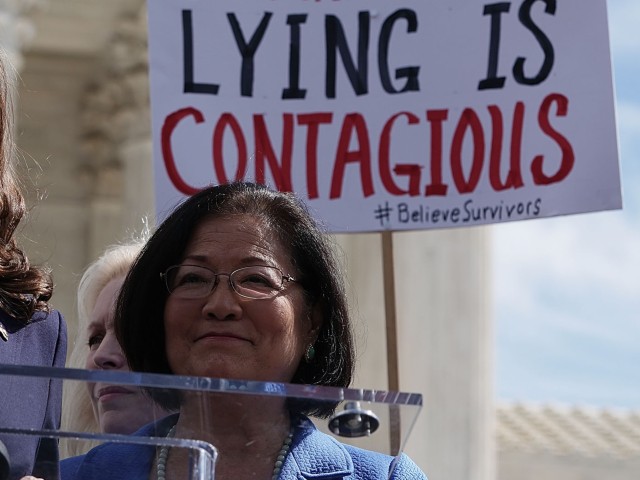 Hirono said, “As most normal people would think, that whether or not Judge Kavanaugh lied to the committee, which should be a total nonstarter for anybody wanting to go to the Supreme Court, is not even the area of focus. It’s so limited, I called it basically—I think the word farce would not be far off to talk about this so-called investigation. It is not going to get us anywhere near the truth. But the other thing that I found totally bizarre and astounding was when Judge Kavanaugh accused the Democrats of engaging in a plot to do him in, and he dragged in Hillary Clinton and all that. This is a conspiracy theory. This is what he believes. This is what he’s going to take to the Supreme Court. And he also was so partisan that it was unbelievable. He even wrote a law review article in 2016 where he said a judge should be totally nonpartisan. That’s not what was shown to us.”

She continued, “There were inconsistencies about his drinking and information we have from various of his classmates, that he was a very belligerent, aggressive drunk. So I would like the FBI to go and interview all of these people, and we have to draw our conclusions, but it was unbelievable, the portrayal of himself as some kind of a boy scout, all he cared about was studying, going to church, doing projects and playing basketball or sports. It was pretty unbelievable to me. And very clearly, when he was asked specific questions about the meaning of the terms in his yearbook, what the meanings of those words were. And as Comey said, when you lie about something like that, it just points to the need to dig deeper.”

She added, “I think there’s a pattern of him not being candid with the committee, it goes back to his nomination hearings in 2006.”