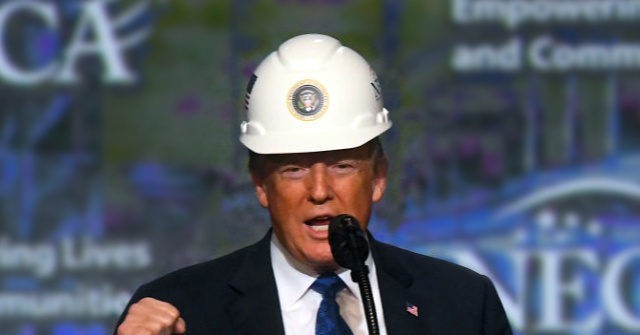 The number of people hired rose to 5.9 million in April, the highest level since the Labor Department began tracking new hires.

The increase in the number of hires came almost entirely from the private sector, which increased hiring by 217,000 for the month, according to the Bureau of Labor Statistics. Government hiring was little changed for the month.

The total number of job openings rose to a higher-than-expected 7.449 million. That was a slight decrease from March’s revised 7.474 million but still near record highs.

The April figure matched the all-time highs hit in August and November of last year.

Job openings in durable good manufacturing, a sector that was Trump’s critics said would be hit by metals tariffs, were down 1,000 jobs to 304,000 from March. But these are up considerably from a year ago, when there were 288,000 openings.

Hires also expanded. There were 204,000 hires recorded in manufacturing in April, up from 190,000 in March. Compared with a year ago, however, hires fell by 13,000, which may be an indication that businesses are having trouble finding workers for open positions. Overall manufacturing hires rose 3,000 to 360,000 for the month, slightly below the 367,000 recorded a year ago.

There were about 10.933 million in the total available labor pool, a broader category that includes those wanting a job but not actively looking.

The large number of job openings compared to unemployed workers is likely to put pressure on employers to raise wages in the coming months. The Federal Reserve closely watches these figures for indications of tightness in the labor market.

The quits level edged up 21,000 to 3.48 million in April. That put the rate of quitting at 2.3 percent, up just one-tenth from a year ago. Quits is typically read as a measure of worker confidence and is also an indicator of potential wage pressures.