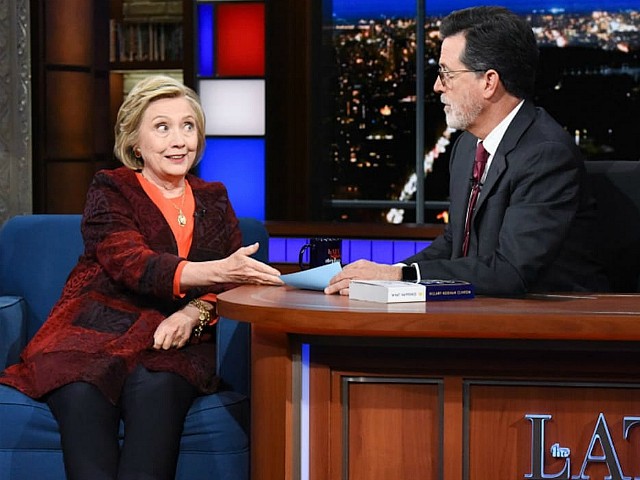 The two-time presidential loser appeared on the anti-Trump late-night show to publicize the paperback version of her book What Happened. Inevitably, the conversation turned to the 36-year-old allegations against the supreme court nominee.

As of now, things are at a standstill. Kavanaugh’s accuser, Christine Blasey Ford, has missed numerous deadlines to agree to testify before the Senate Judiciary Committee, even as Republicans bend over backward to accommodate her demands — some of which are being criticized as unreasonable. For example, Ford does not want Kavanaugh to have the chance to rebut her testimony, she does not want to be questioned by lawyers, and she refuses to fly in from California.

Many see these as delaying tactics, as an attempt by Ford and her left-wing handlers to stretch out the process until after the election, which could kill Kavanaugh’s confirmation if Democrats take over the Senate.

Another delaying tactic has been this call for an FBI investigation. Although the FBI does not investigate local crimes, Ford, Democrats, and now Hillary Clinton continue to push for the FBI to get involved in an alleged incident that happened in 1982 when Kavanaugh was still a minor — 17-years-old.

What’s more, Ford says she cannot remember where or when it happened.

For his part, Kavanaugh unambiguously denies the allegation and two witnesses back him up. What’s more, unlike his accuser, Kavanaugh appears eager to testify to his innocence in public and under the penalty of perjury.

On Friday, Hillary not only called for the FBI to get involved, she also accused Republicans, who are now in a second week of delay, of rushing things.

Republicans are “trying to rush this through to the detriment of the American public who deserves to have answers to whatever charges might be presented,” she said.

“So I’m hoping that at some point there will be an agreement to have an investigation,” she added. “It would be very easy for the FBI to go back and finish the background investigation, to investigate these charges.”

The FBI has already completed six background checks on Kavanaugh.

Colbert also brought up Merrick Garland, who was President Obama’s Supreme Court nominee after the 2016 death of Antonin Scalia.

“Do you think the nomination process in general is irreparably damaged following the Republicans not allowing Merrick Garland to be heard?” Colbert asked.

“Well, it’s one of the reasons I think a lot of Americans are just fed up with the political process,” Clinton answered, adding, “Because in a democracy, you have to have at least enough trust to be able to work with each other and try to solve difficult problems.”

Referring directly to Garland, she said, “When the Republicans refused to give a distinguished judge, appointed by President Obama, even the courtesy of meetings let alone a hearing, that sent such a terrible message.”

What Clinton left out, though, is that Republicans refused to consider Garland because this Supreme Court opening occurred in the heat of the 2016 presidential election.

The precedent for not going through a Supreme Court confirmation process during a presidential election year is nothing new. In fact, Barack Obama’s own vice president backed this precedent in 1992.

There was no Supreme Court vacancy in 1992. When he made those remarks (linked above), Biden was getting ahead of that possibility. But had there been a vacancy in 1992, and had the vacancy been held until after the election, it would have been Hillary Clinton’s husband, President Bill Clinton, who benefited from the precedent.

Lost on no one, though, except the sycophantic Colbert, is the irony of having Hillary Clinton (of all people) seriously discuss the issue of sexual misconduct. For decades Hillary has been seen as her husband’s chief enabler, a man credibly accused of rape, who settled a sexual harassment suit as president, who engaged in a sleazy Oval Office sexual affair with a young subordinate…

The left, including feminists, and the establishment media, never wanted the FBI to investigate any of this.