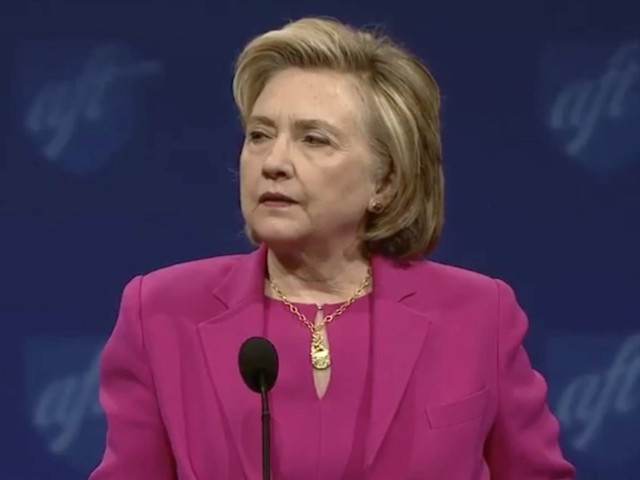 Tuesday at the Atlantic festival in Washington D.C., former Secretary of State and 2016 Democratic presidential nominee Hillary Clinton said Supreme Court associate justice nominee Brett Kavanaugh’s behavior during his testimony before the Senate Judiciary Committee was “quite out of bounds.”

Clinton said, “I want the FBI to conduct as thorough an investigation as they possibly can within whatever restraints are imposed upon them, but I think for anyone who believes there’s such a thing as a judicial temperament and that we want judges, particularly those on our highest court, to approach issues, plaintiffs and defendants with a sense of fairness, that there’s a lot to be concerned about.”

She continued, “I was in the Senate for eight years. I voted against nominees from President George W. Bush on the basis of, you know, their positions. But I don’t remember any of them, nor the most recent appointment by President Trump of Neil Gorsuch, behaving in such a way. I regret they take the stand they take. I worry about the consequences of their will affecting so many people and their lives and our country as a whole, but this latest example is in a different category. We have not seen anything quite like that for a long time. You know, Clarence Thomas vigorously defended himself, as some of them can remember. It was a very painful and difficult time for Anita Hill and many watching because it felt like, and probably was, a denial of the legitimacy of women’s stories. In this case, though, the performance, the behavior, was quite out of bounds. I don’t ever remember anything like that.”

She added, “So there is such a thing that you seek in judges of a judicious temperament, people who are able to discipline themselves to be open to the evidence wherever it might lead, to be fair to all the litigants appearing before them. I’m a recovering lawyer. I used to practice law, and I was in different kinds of courts, and this was quite unusual what we saw the other day, and certainly, the senators should, on both side of the aisle, take that into account. It’s not like there’s not a long list of other judges who would decide the same way.”