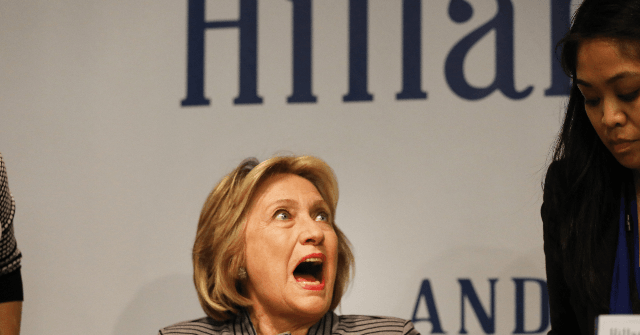 Hillary Clinton resurrected the Russia narrative during a stop on her Gutsy Women tour, partially blaming her 2016 loss on foreign interference and concluding that pursuing impeachment is the “only appropriate remedy” to address President Trump’s “unconstitutional abuse of power, his contempt of Congress, and his obstruction of justice.”

The failed presidential candidate tweeted a video from a Washington, DC, stop of her Gutsy Women tour and resurrected the Russian narrative, alluding to GOP-Russia “collusion” and expressing strong support for the Democrat-led House impeachment inquiry.

At the DC stop of our Gutsy Women tour, I laid out why impeachment is the only appropriate remedy for the administration asking—or outright extorting—foreign countries to intervene on his behalf in our elections: pic.twitter.com/uSNgPukfiK

All bets are off. If foreign governments think they can tilt the playing field as they did against me, which was a deliberate, well planned out effort laid out in an indictments against Russian military actors and their allies– Well, you know, Republicans seem to think that, ‘Ok, so far Russia’s playing on the red team. You know. So we like it. We’re not going to stand up against it.’ Well, who’s to say that next week they’re going to be playing on the blue team? It’s crazy my friends.

However, Clinton failed to mention the well-documented Ukrainian efforts to sink Trump and boost her campaign.

The former secretary of state continued, calling the partisan-fueled impeachment inquiry the “appropriate remedy” to the “serious assault on our democracy that is apparently asked for.”

“So impeachment is the appropriate remedy, and it is such a serious assault on our democracy that is apparently asked for, aided and abetted by not only the president but his allies who seem not to either care or understand how deeply dangerous this is,” Clinton said.

“I am all in favor of what the House is doing and gathering the evidence and making the case because this president has to be held to account because of his unconstitutional abuse of power, his contempt of Congress, and his obstruction of justice,” she added.

President Trump suggested on Tuesday that “Crooked Hillary” should join the race “to try and steal it away from Uber Left Elizabeth Warren” on the condition of explaining “all of her high crimes and misdemeanors including how & why she deleted 33,000 Emails AFTER getting ‘C’ Subpoena!”

Clinton replied, “Don’t tempt me. Do your job,” fueling speculation that she is considering another presidential run.

I think that Crooked Hillary Clinton should enter the race to try and steal it away from Uber Left Elizabeth Warren. Only one condition. The Crooked one must explain all of her high crimes and misdemeanors including how & why she deleted 33,000 Emails AFTER getting “C” Subpoena!

Clinton recently floated the possibility of a rematch on PBS NewsHour:

You know, it truly is remarkable how obsessed he remains with me. But this latest tweet is so typical of him. Nothing has been more examined and looked at than my emails. We all know that. So, he’s either lying or delusional, or both. There was no subpoena, as he says in a tweet this morning. So, maybe there does need to be a rematch. I mean, obviously, I can beat him again. But, just seriously, I don’t understand, I don’t think anybody understands what motivates him, other than personal grievance, other than seeking adulation.

Clinton is expected to host “Dinner and a Conversation” in her Washington, DC, home this month in partnership with the Democratic National Committee (DNC) and Women’s Leadership Forum, adding to the speculation of another presidential bid on the horizon.