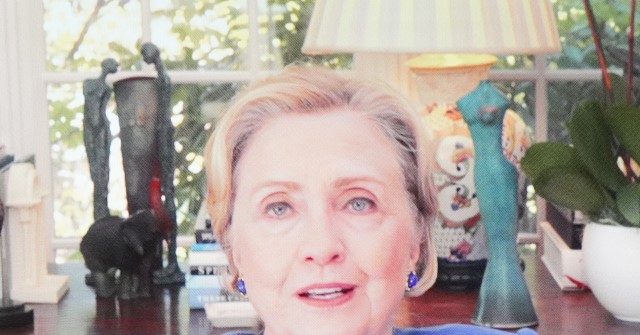 “Trump & Fox are desperately spinning up a fake scandal to distract from his real ones. So it’s a day that ends in Y,” she tweeted. “The more his misdeeds are exposed, the more they lie. For those interested in reality, here’s a good debunking of their latest nonsense.”

Hillary had ignored questions earlier this week about the revelations from the Daily Mail while visiting her daughter Chelsea in Manhattan. Biden’s White House has also refused to answer questions about the investigation, which deals with one of the largest political scandals in modern history.

Durham’s court filings allege that Hillary’s 2016 campaign associates spied on Donald Trump’s campaign and presidency through cell phone data that was conveyed to the CIA, according to the New York Times. The data purportedly suggested Trump was somehow involved in a Russia hoax. Breitbart News reported:

The motion was filed in the case of former Clinton Campaign lawyer Michael Sussmann, who is charged with lying to the FBI about whether he was working for the campaign when he told the FBI about a false link between Trump and Russia.

Sussmann was a partner at Perkins Coie, which often represents Democrats and which hired Fusion GPS to produce the false Russia “dossier” on then-candidate Trump, at the behest of the Clinton campaign and the Democratic National Committee.

Durham’s filing deals with a potential conflict of interest involving Sussmann’s legal representation from Latham & Watkins LLP, which also represented others in the investigation “whose interests may conflict with those of the defendant.” These, the Techno Fog blog notes, include Perkins Coie, former Perkins Coie lawyer Marc Elias, and the Hillary Clinton campaign. If they are also charged or exposed to criminal liability, the firm might face a conflict of interest among the various defendants.

As of yet, Sussmann has not been convicted of any wrongdoing.

Clinton dubbing the court filings a “fake scandal” while suggesting the revelations are a distraction set in place by Trump is a classic misdirection play, one that mirrors the political scandal itself. Hillary accused Trump of coordinating with the Russians, while Hillary allegedly spied on Trump in an attempt to corroborate that Trump was involved with the Russians.

In 2019, special counsel Robert Mueller’s probe into the Russia hoax found insufficient evidence that Trump’s campaign worked with Russia to influence the 2016 election.

The latest pleading from Special Counsel Robert Durham provides indisputable evidence that my campaign and presidency were spied on by operatives paid by the Hillary Clinton Campaign in an effort to develop a completely fabricated connection to Russia. This is a scandal far greater in scope and magnitude than Watergate and those who were involved in and knew about this spying operation should be subject to criminal prosecution. In a stronger period of time in our country, this crime would have been punishable by death. In addition, reparations should be paid to those in our country who have been damaged by this.

Durham’s investigation may extend to the Biden administration. President Biden’s national security adviser Jake Sullivan may be implicated in the scandal due to pushing the Russia hoax as a 2016 Clinton campaign staffer. Breitbart News reported:

On October 31, 2016, about a week before the 2016 presidential election, Sullivan, who was working on the Clinton campaign at the time, pushed a Slate report “showing that the Trump Organization has a secret server registered to Trump Tower that has been covertly communicating with Russia.”

Sullivan’s role in pushing these claims is receiving fresh scrutiny after a recent filing by Special Counsel John Durham laid out allegations that a lawyer who was with the law firm representing Clinton’s campaign had worked with a tech executive to gather the evidence for those claims.

The Democrats were SPYING on him. pic.twitter.com/ZurV5WmVxt