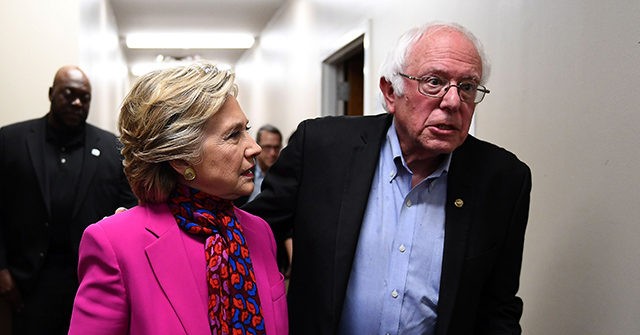 In a recent “off the record” conversation with Page Six’s Cindy Adams, Clinton sounded off on the sprawling field of Democrat presidential candidates. According to Adams, Clinton has “no good words for Sanders, writing that the Obama-era secretary of state believes “Anyone overtaking him in a district considered his, he’ll burn the place down.”

Clinton has blamed her own election loss to President Trump on former President Barack Obama, fired FBI Director James Comey, the Democrat National Committee (DNC), and the nation of Russia. She has also blamed Sanders, who begrudgingly endorsed her, declaring at the time that she “will make an outstanding president.”

Though Sanders did not endorse Clinton as quickly or enthusiastically as she may have liked, he did not attack her during the primary as strongly as he could have. The socialist senator defended his opponent’s illegal use of an unsecured “homebrew” email server to conduct official business as Secretary of State, and he largely declined to pick up on “pay-to-play” allegations surrounding the Clinton Foundation — particularly Clinton’s involvement in the sale of 20% of America’s uranium to Russia.

Judging by the Vermont senator’s recent remarks, there looks to be no love lost between him and Clinton. When Meghan McCain of The View asked this March whether the two had met to discuss the 2020 race, Sanders bluntly replied, “I suspect not.”

“You’re not interested in any advice from her?” McCain followed up.

“I think not,” he responded.