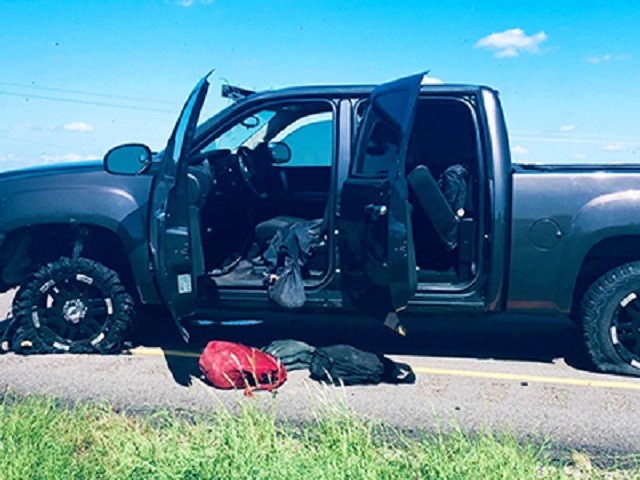 Zapata Station agents received a tip about a grey pickup believed to be loaded down with a group of illegal immigrants. The agents caught up with the truck on U.S. Highway 83, several miles from the Webb County line, according to Laredo Sector Border Patrol officials.

The agents attempted to stop the truck with their emergency lights, but the driver failed to yield and accelerated away.

As the tires quickly deflated, the truck continued on until it came to a stop on the overpass at Espejo Molina Road. As the truck stopped, several people bailed out and attempted to flee on foot. Agents quickly rounded up all nine of the truck’s occupants, including the driver.

Border Patrol officials seized the truck and arrested the driver. The driver could face charges of human smuggling.

The illegal immigrants were transported to a Border Patrol station for processing on immigration violations and a biometric background investigation, officials stated.

Smugglers frequently put the lives of their “human cargo” at risk through these types of pursuits. In June, five migrants were killed in a crash that occurred at the end of a chase involving Border Patrol agents and Texas sheriff’s deputies. The driver of the suburban fled from Border Patrol agents from the Carrizo Springs Station and lost control at about 100 miles per hour, Breitbart Texas reported. The smuggler packed 14 people into the Suburban.

Reporters asked Sheriff Boyd why the Border Patrol agents and his deputies were pursuing the vehicle. He called it “good police work.” The sheriff said these types of pursuits happen frequently as drug and human smugglers attempt to avoid arrest. He also said this is a good example of why walls are needed to secure the border with Mexico.