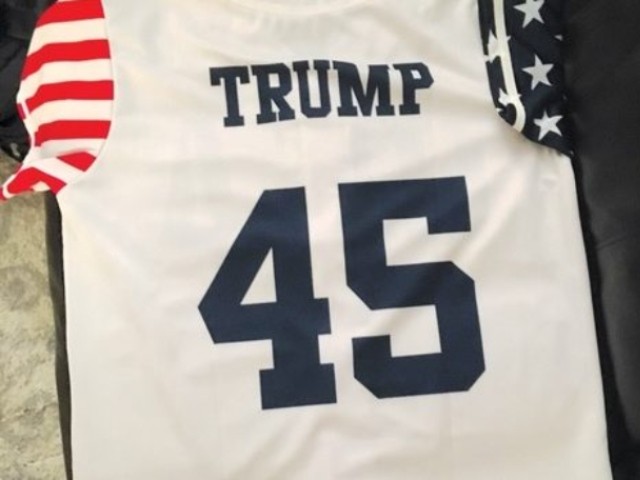 A student in North Carolina was forced to remove a red, white, and blue USA sports jersey with Donald Trump’s name on it that he wore to a patriot-themed school football game, according to reports.

The student’s father, Mike Collins, slammed Harnett Central High School in Angier, North Carolina, for forcing his 18-year-old son to remove the Trump jersey. Saying that the school’s reason for its action was ridiculous, according to ABC 11.

Collins says that the school told his son that the shirt was “disruptive.” He said his son complied but that he was so humiliated that he left the game.

A father tells me his son was asked by the school principal to remove this jersey during a patriotic-themed football game after people complained. Dad, a registered Democrat, says his son complied but felt humiliated. @HarnettCoSchool says it supports expression not disruptions pic.twitter.com/W9U9v2vBLF

“We don’t want any kids violated. We don’t want to see kids embarrassed over something like this,” Collins told the ABC affiliate. “He was not disrespectful. He was not acting in a manner that would cause attention to him.

Collins also said that he and his son were not going around proclaiming the greatness of Trump. In fact, Collins is a registered Democrat, he said.

“We’re not promoting Donald Trump. He’s our president. Again, you’ve got to respect your president. I can assure you that there was nothing about this shirt that was disruptive. I think we should stand up for our rights,” Collins said.

For its part, without admitting to any errors in judgment, the school district reaffirmed the students’ right to free speech.

“While we cannot comment on specific student issues, the Harnett County Schools supports and affirms students’ rights to express themselves,” the district said in a statement. “As long as the expression does not disrupt, and is not reasonably expected to disrupt, the educational mission of the school system, these rights include wearing clothing expressing political messages or supporting political candidates.”

Collins has consulted an attorney but has not said if he plans any actual legal action. He also noted that members of the school board promised to take action and make things right.