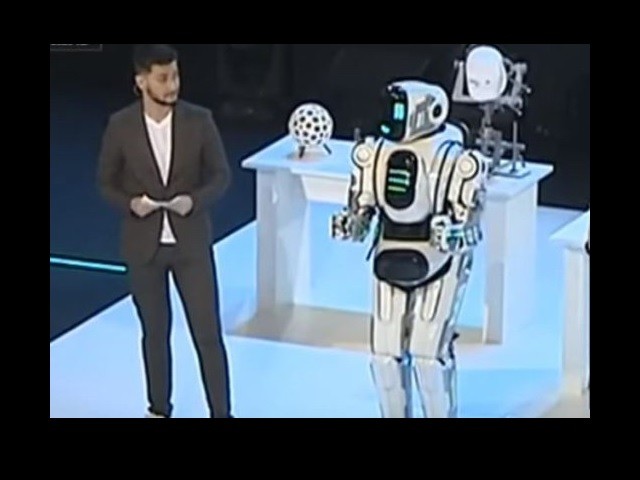 A supposed “hi-tech robot” displayed at a youth robotics forum on Russian state television turned out to be a man in a suit, reports confirmed Wednesday.

Footage broadcast live on Russia-24 showed television anchors praising the ersatz android during coverage of a technology forum held in Yaroslavl, a city about 150 miles north-east of Moscow, boasting that “Robot Boris has already learned to dance and he’s not that bad.”

“It’s entirely possible one of these [students] could dedicate himself to robotics,” one anchor said. “Especially as at the forum they have the opportunity to look at the most modern robots.”

“I know mathematics well but I also want to learn to draw,” Boris responded, before dancing to the Little Big song Skibidi.

Other footage from the event showed Boris taking part in banter with people on stage and performing various dances. His level of sophistication was used to encourage children to develop an interest in robotics and as proof of the country’s technological breakthroughs.

However, many viewers were left unconvinced by the robot, with the Russian website TJournal posing a series of questions about the robot’s performance, including the location of his external sensors and why he made so many “unnecessary movements” while dancing. Later on, Some photographs posted on social media even showed the robot’s very visible neckline.

A photograph published by MBKh Media, an anti-Kremlin agency founded by the Vladimir Putin opponent Mikhail Khodorkovsky, appeared to show the man wearing the robot suit ahead of the forum.

As the questions mounted, it emerged that Boris was a £3000 costume made by the company Show Robots designed to give the “near total illusion that before you stands a real robot,” equipped with microphone and tablet display.

The event’s organizers did not claim that the android was anything other than a man in a suit, according to local reports, so it is not clear why the state television station chose to do so. On Wednesday morning, the television report was removed from Russia-24’s YouTube channel but was uploaded again by early afternoon.

Russia-24 is one of many Kremlin-funded networks operating around the world, and as such serves as a propaganda machine the country and the Putin regime.

Last week, the network was forced to apologize after they ran a fake report showing a “young Ukrainian man” complaining his country’s progress five years after their revolution. In reality, the man turned out to be Belarusian, and he later told RFE/RL he was “totally ashamed” to have participated in the report.