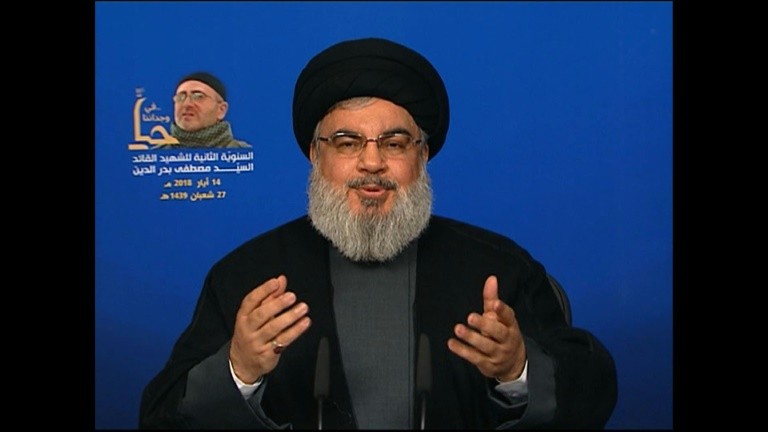 TEL AVIV – Hezbollah Secretary-General Hassan Nasrallah warned Israel against attacking the Iranian-backed terror group, saying that its rockets will reach all of Israel.

“In a future war, all of occupied Palestine will be struck by our rockets,” Nasrallah said during a televised speech Saturday.

He called on Prime Minister Benjamin Netanyahu and the new IDF chief of staff Maj. Gen. Aviv Kochavi not to “err in their assessments.”

“They’ll regret it,” he said, adding that Israel’s actions could “drag the region into a war or a major confrontation.”

He warned Israel that Hezbollah’s policy of restraint in the face of Israeli strikes could change on a dime.

“At any moment the Syrian leadership and the axis of resistance can take a decision to deal with the Israeli aggression in a different manner,” Nasrallah said.

“Any Israeli aggression, whether it is war or the assassination of Hezbollah fighters in Lebanon or Syria, we will respond to it. Any attack or aggression is, in our view, a declaration of war,” the terror chief added.

The Hezbollah leader also mocked the IDF for its failure to discover the Hezbollah-dug cross-border attack tunnels, saying they had “existed for years.”

Earlier this month, the IDF wrapped up its operation to locate and destroy the tunnels, dubbed Northern Shield.

“They were dug before the Lebanon War,” Nasrallah claimed. “It took Israelis a long time to expose them.”

“One of the tunnels discovered recently is 13 or 14 years old,” he said, “and was located entirely in Israeli territory, meaning all of Israel’s technology and capabilities failed to detect this tunnel.”

The elderly Hezbollah leader also dismissed rumors that he is critically ill.

“All that is published are lies, which are disconnected from reality,” he said.

“My heart, my head and my body are in good shape.”

Hezbollah officials earlier this month said news that Nasrallah had suffered a heart attack was a “Zionist lie.”

Before Saturday’s interview on Lebanon’s al-Mayadeen TV, Nasrallah had not been seen in public, or even heard from, for more than two months.

Nasrallah said during the three-hour interview that he chooses to speak “when there’s something to talk about.”

The Hezbollah leader also claimed that Israel had failed to accomplish any of its goals in Syria.

“You did not succeed in preventing the arrival of the needed capabilities in Lebanon. So you failed. You failed in Syria. Now you are [carrying out airstrikes]. But that doesn’t mean you are achieving your goal,” he stated.

He also said the U.S. announcement that it would withdraw from Syria was another “failure.”

The Arabic spokesman for the IDF responded to the interview by saying that Nasrallah is “isolated on all sides.”