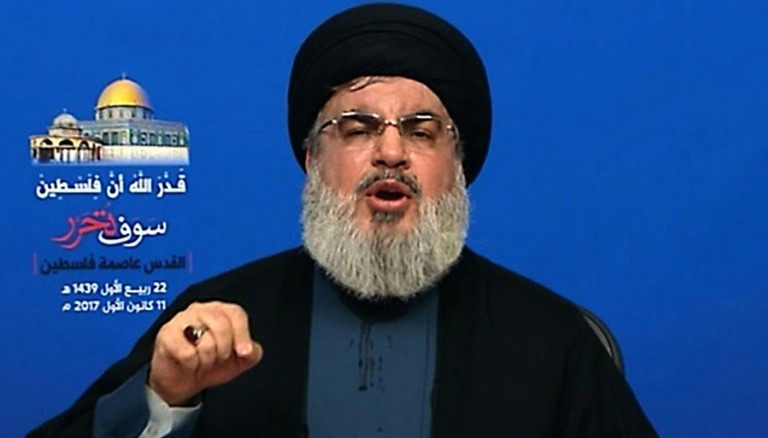 TEL AVIV – Hezbollah chief Hassan Nasrallah on Saturday warned that the IDF will not be able to withstand the number of missiles the terror group has in its possession. He also told the Palestinians not to make a deal with Israel.

Any Israeli attack on Lebanon “will definitely and certainly be responded to,” Nasrallah said in a speech on Lebanese TV marking the terror group’s “Martyrs’ Day.”

He added that despite Israel “possessing a large army, advanced air force and nuclear weapons, [it] cannot handle the number of missiles possessed by Hezbollah.”

He stated that his terror group will not kowtow to the pressure of threats and sanctions, and surrender its missile program. His remarks were in apparent response to Israel’s warning to the Lebanese government that it would take action against Hezbollah’s precision missile factories if nothing was done about them.

Nasrallah further called on his government “to put up with this level of diplomatic pressure because giving in, if we assume it happens, means that Lebanon will be open to an Israeli aggression any time, any moment.”

“If we have to sell our homes to protect these rocket capabilities in the hands of the resistance, we will do that,” Nasrallah said. “The Lebanese army cannot hold missile capabilities. It is prevented from doing so by the U.S. and other countries. It cannot hold capabilities that will allow it to create an equation of deterrence against the enemy. That is why Hezbollah’s missiles are significant.”

Nasrallah also stated that Israel is said to be reaching an Egyptian-brokered agreement with the Gaza-ruling terror group Hamas to ease restrictions on the Strip in return for quiet along the Gaza border. He slammed the initiative, saying, “We condemn any normalization with Israel.”

He further called on the Palestinian people “not to be afraid.”

In addition, Nasrallah decried blossoming ties between Israel and the Gulf states, saying, “The current normalization puts an end to the ِArab hypocrisy and brings down the masks of the deceitful and hypocrites.”

But, he added, the upside was that now everyone was aware of where they stand.

“Finally it is clear who stands on which side — a necessary condition for victory,” he said.