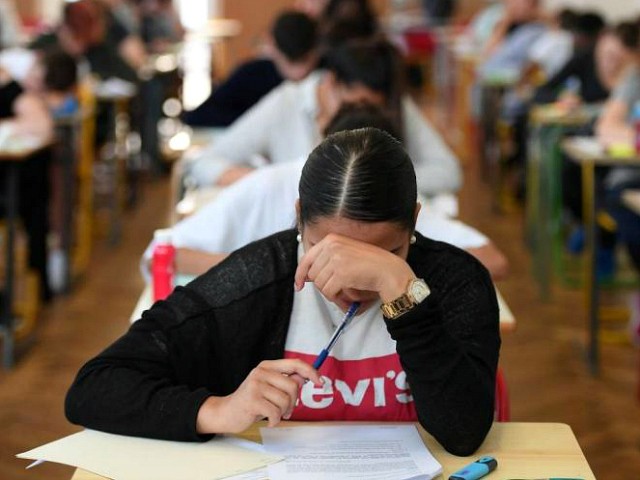 Conservative grassroots parents, who voiced concerns that the true purpose of Common Core was to promote left-wing ideology in schools are vindicated, say education policy analysts at the American Enterprise Institute (AEI).

“Once upon a time, Common Core critics were roundly mocked for fearing that the reading and math standards would somehow serve to promote sweeping ideological agendas,” Frederick “Rick” Hess and Grant Addison wrote Thursday at National Review.

The authors explained, however, how education company UnboundEd CEO Kate Gerson recently announced to teachers attending her “standards-aligned” training: “If you are under the impression that there are good white people and bad white people, you’re wrong.”

After hearing Gerson’s pitch, Hess and Addison concluded, “Today, Gerson and her team are doing their best to vindicate those concerns.”

Meet the indelible Diana Bowles, one of our P-3 ELA facilitators at #StandardsInstitute! pic.twitter.com/Ria99VVXhE

“Gerson informed her charges that racial biases are pervasive, universal, and something ‘you cannot be cured from,’” the AEI education policy analysts added and continued:

For this reason, UnboundEd’s training in reading and math instruction is “grounded in conversations about the roles that race, bias and prejudice play in our schools and classrooms.” Its Standards Institute prepares educators to be “Equity Change-Agents.” To become one, participants are told, they must first acknowledge that “we are part of a systematically racist system of education” and recognize that “we have participated in this paradigm through instruction and pedagogy.” As its “Bias Toolkit” explains, UnboundEd sees its mission as “disrupting patterns of implicit bias, privilege, and racism in ourselves, our organization, and in the education field.”

“Ironically, UnboundEd helps validate some of the most far-out conspiracy theories that have been spun about the Common Core,” Hess and Addison wrote.

“In a class filled with a teacher and students who did not look like me, her question felt like less of an invitation to share my thoughts, than a demand to explain what it means to be black.” https://t.co/O2Cuux6Hlb pic.twitter.com/YOedhDz9aj

UnboundEd is a reincarnation of EngageNY, an online library of curricula aligned with the Common Core standards. The site, once hosted by the New York State Education Department, was the subject of controversy in 2014 when it was discovered the Student Services page of its Common Core materials section sent students to a sex quiz.

Students were urged to “Make test prep fun” by taking quizzes that helped to determine if they were “evil,” a “sexy bitch,” a “freak,” “insane,” “sluts,” or “losers.”

After EngageNY’s “Race to the Top” Obama-era funding dried up, the group re-created itself as UnboundEd in 2016.

“What we see as the biggest challenge in schools is managing a divide between rigorous high standards for all students and the real developmental consequences of poverty,” said Gerson upon launching the new group, reported Education Week.

Note to readers: “rigorous high standards” is the phrase used by Common Core proponents to describe the Core.

“I wanted today’s conversation to be organized around a set of calls for action,” Gerson recently told her trainees during a “Standards Institute” (see video above).

“We want to invite you to figure out how to combine the conversations about equity while we’re talking about teaching and learning,” she said. “Because we see it as a very integrated situation.”

We must do the uncomfortable work of first acknowledging and examining our own biases, so that we may then rectify them. https://t.co/Mix7tJL9kt pic.twitter.com/6fhPffSfE5

As Hess and Addison observed, UnboundEd is not exactly a slouch as far as education companies go. As of 2017, the group has raked in some $20 million in grants — including more than $11 million from the Bill and Melinda Gates Foundation — and millions from the Carnegie Corporation, the Hewlett Foundation, the Bloomberg Foundation, IBM, the Helmsley Charitable Trust, and New Profit.

The authors also make the point that UnboundEd has embraced the “junk science” that surrounds the entire “public-schools-are-dens-of-racism-and-bias” narrative. The “evidence” Gerson has cited of such pronounced racism and bias in schools is actually not “evidence” at all, but, rather, documentation of the existence of racial disparities.

“[W]hat Gerson has found is a disparity, one that may reflect bias,” Hess and Addison noted. “This distinction is crucial.”

Public schools, however, are entrenched in social and emotional learning, as well as “white privilege” and anti-bias training.

Frustrated by the disappointments of ambitious reforms such as No Child Left Behind and the Common Core, progressive school reformers have switched horses and decided that America’s real educational challenge is its deep-dyed racism and inveterate culture of white supremacy. This tack conveniently allows them to embrace the charms of the Resistance while quietly walking away from the failures and unpopular legacy of Bush- and Obama-style school reform.

The AEI policy analysts take to task Republicans — many calling themselves “conservatives” — who have been champions of “education reforms,” including Common Core, over the last few decades. They urge them to take notice of “how far all this has strayed from what they signed up for.”

“It’s past time to insist that school reformers choose between old alliances and their new hobbyhorse — and make clear that conservatives will no longer champion or countenance a vision of ‘reform’ that pits Americans against one another in the service of junk science and performative wokeness,” they conclude.