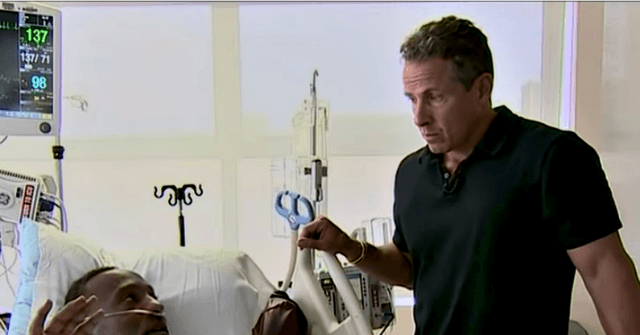 Secret Service arrested Chris Grant, a 50-year-old victim of the El Paso, Texas, shooting who was hailed a hero after claiming to have thrown bottles at the shooter, according to law enforcement officials who spoke to the Washington Examiner.

Grant, a survivor of the deadly August 3 shooting in El Paso, was honored by the White House for his alleged acts of heroism during the deadly shooting rampage, which took the lives of 22 and injured over two dozen more. Grant, in an interview with CNN’s Chris Cuomo, recalled how he threw bottles at the shooter before getting shot himself.

However, El Paso police spokesman Sgt. Enrique Carrillo told the Washington Examiner that media outlets did not immediately confirm Grant’s recollection of the event with the department, adding that “his [Grant’s] actions did not match his account.”

“Nobody bothered to check with us,” Carrillo told the Examiner. “They would have been informed, as I am telling you now, that our detectives reviewed hours of video and his actions did not match his account.”

“His statements were inconsistent with what was revealed on video,” Carrillo added.

Additionally, according to recent reports, Secret Service arrested Grant on Monday due to an outstanding warrant.

“On Monday, Sept. 9, 2019, a White House visitor with an arrest warrant was temporarily detained by U.S. Secret Service Uniformed Division Officers,” a spokesperson for the Secret Service said.

“It was subsequently determined that while the arrest warrant was still active, the agency that issued the warrant would not extradite, at which time the individual was released from Secret Service custody,” it continued.

Authorities described Grant as a “fugitive from justice”:

Grant has a criminal record for theft and evading arrest, according to Texas court documents reviewed by the Washington Examiner. He was sentenced to eight months in prison for car theft in March, after pleading guilty to stealing a silver 2009 Mazda 6. In 2016, he pleaded guilty and was also sentenced to 18 days in jail for stealing TVs from a Sears in Richardson, Texas. He pleaded guilty to evading arrest in Collins County in 2016.

Cuomo highlighted Grant’s depiction of the shooting last month, visiting him in the hospital and elevating his “hero” status, purportedly without first reaching out to the El Paso police department to confirm Grant’s recollection:

“I started throwing random bottles at him,” Grant told Cuomo. “I’m not a baseball player, so one went this way, one went that way.”

“When I got hit, it was like somebody put a hand grenade in my back and pulled the pin,” he added.

Trump honored Grant– as well as first responders – following CNN’s national interview with the shooting survivor, whom the outlet described as a “hero.”