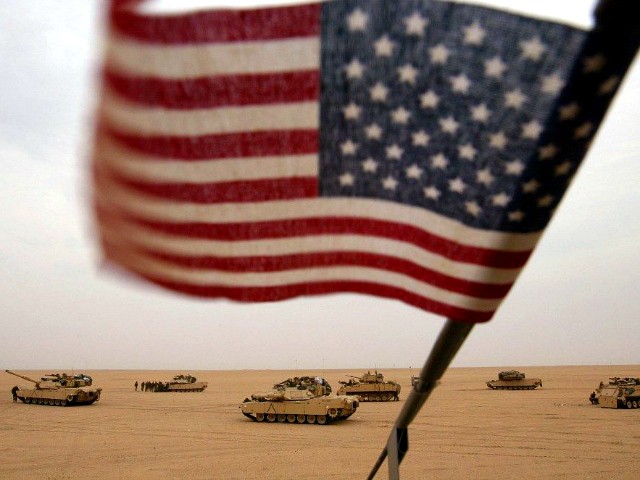 The United States armed forces are only “marginally able” to defend America against the current high levels of risk primarily fueled by “formidable” U.S. rivals China and Russia, revealed the 2019 Index of U.S. Military Strength released Thursday by the Heritage Foundation, a conservative think-tank.

“As currently postured, the U.S. military is only marginally able to meet the demands of defending America’s vital national interests,” Heritage reported.

Dubbed as “the only non-governmental and only annual assessment of U.S. Military Strength,” the Heritage Foundation’s fifth annual index explained:

In the aggregate, the United States’ military posture is rated “marginal” and features both positive and negative trends: progress in bringing some new equipment into the force, filling gaps in manpower, and rebuilding some stocks of munitions and repair parts alongside worrisome trends in force readiness, declining strength in key areas like trained pilots, and continued uncertainty across the defense budget.

The think-tank identified Russia, China, Iran, North Korea, and jihadi groups in the Middle East and Afghanistan as the top threats facing the United States, with Moscow and Beijing each rated as a “formidable” menace.

Collectively, the threat to U.S. vital interests remains “high” in the 2019 Index despite a decrease in the assessed threat level for Af-Pak terrorism from “high” to “elevated” … Russia and China continue to be the most worrisome, both because of the ongoing modernization and expansion of their offensive military capabilities and because of the more enduring effect they are having within their respective regions.

Overall, the 2019 Index concludes that the current U.S. military force is likely capable of meeting the demands of a single major regional conflict while also attending to various presence and engagement activities but that it would be very hard-pressed to do more and certainly would be ill-equipped to handle two nearly simultaneous major regional contingencies.

Russia has been trying to improve its military ties with China in recent months. Early this year, the latest Global Firepower (GFP) index, which ranks 133 countries annually, ranked the United States armed forces as the globe’s most powerful military, trailed by Russia, China, India, respectively.

The limits imposed on defense spending and the programmatic volatility created by continuing resolutions, passed in lieu of formal budgets approved on schedule, have kept the military services small, aging, and under significant pressure. Essential maintenance continues to be deferred, the availability of fewer units for operational deployments increases the frequency and length of deployments, and old equipment continues to be extended while programmed replacements are either delayed or beset by developmental difficulties.

According to Heritage, the “positive steps” taken by U.S. President Donald Trump’s administration have failed to reverse the damage caused by its predecessor, namely the sequestration budget that continues to hamper defense spending.

The Trump administration and the Republican Congress “have not overturned the Budget Control Act [sequestration] that otherwise caps defense spending and, absent additional legislative action, will reassert its damaging effects in 2020,” the think-tank declared.

“Without a real commitment to increases in modernization, capacity, and readiness accounts over the next few years, a significant positive turn in the threat environment, or a reassessment of core U.S. security interests, America’s military branches will continue to be strained to meet the missions they are called upon to fulfill,” it added.

Heritage noted that its index gauges the American military’s ability to perform its mission.