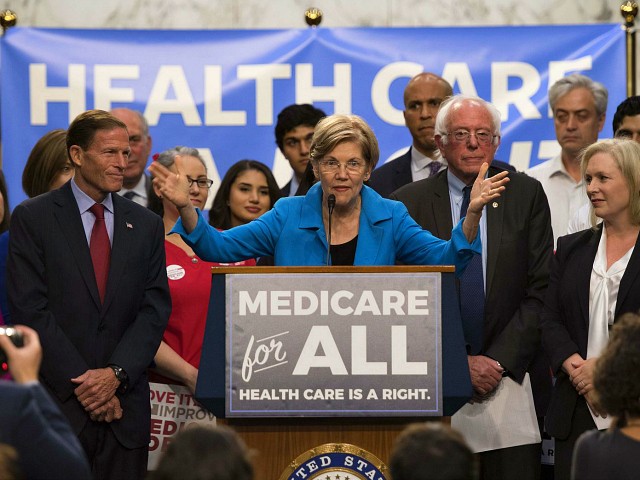 Henry Olsen, author of The Working Class Republican: Ronald Reagan and the Return of Blue-Collar Conservatism, warned of “Medicare for all” Democrat proposals gaining popularity in the absence of Republican solutions to rising healthcare costs. He offered his analysis in a Tuesday interview on SiriusXM’s Breitbart News Tonight with hosts Rebecca Mansour and Joel Pollak.

“Medicare for all is a huge challenge for Republicans because a recent poll put out from Gallup this month showed that 70 percent of Americans believe that our healthcare system has major problems or is in a state of crisis,” Mansour said. “We see the polling that Americans are really latching onto this Medicare for all thing, including even Republican voters, and the GOP has no answer to it, really. What do you think is going to happen with this? The GOP is not addressing the needs of the median voter that’s getting hammered by our current healthcare system.”

The two wings of the pre-Trump GOP didn’t want to handle it. The libertarian anti-government crowd of the GOP didn’t think it was right for government to try and step in and regulate private insurers or subsidize private-sector health insurance for people who can’t afford it, and the business community didn’t want to disturb the private-sector healthcare program and didn’t want to pay the taxes to subsidize people. Republicans have to understand that [the] most popular part of that phrase is the “for all,” that Americans with experience with Medicare tend to like it because when you add in supplemental insurance that they have, it actually provides pretty decent insurance for a pretty low cost.

Olsen added, “People — as we see even in Republican states — are voting for the Medicaid expansion because they would like to see poor people and working-class people have access to doctors. So the question is: what do you do with the Republicans to make sure that those things are actually being met, but in a way that doesn’t lead us down the road to one-size-fits-all bureaucratized government monopoly healthcare?”

“You have to engage the people and listen to their concerns, and if you don’t do that then what you do is empower people like Kamala Harris or like Elizabeth Warren who are going to say, ‘Their answer is no answer, and mine’s the only one on the table. You gotta pick me,’” Olsen added.

President Trump has often cited Australia’s system as something that we can perhaps adopt or model our healthcare reform on. Well, Australia has a two-tiered system — so does Singapore and many of these other places that people cite — it’s not single-payer, it’s not like Canada or the U.K. But almost all the two-tiered systems have a feature where you are required to buy health instance, which would be a mandate, which the GOP has been dead-set against for so long. They’re going to have to face all these things if they’re going to avoid the Kamala Harris-Bernie Sanders Medicare for all socialized medicine.

The Republican Party, replied Olsen, is too puritanical in its economic disposition.

“This gets down to one of the biggest battles, I think, that needs to be confronted in the Republican Party, which is the idea that somehow, through sheer force of will and presentation of numbers, we’re going to get Americans to accept a level of federal government involvement that we have not seen since 1928. That idea is a fantasy,” determined Olsen.

Olsen continued, “What we are doing is we are living in a world where people are accepting of some degree of government involvement. They don’t want total government control, but they want the government to help average people live dignified lives, and sometimes that means subsidy or regulation.”

Olsen went on, “Does it mean a mandate? Maybe not. But in Australia what they say is that they’ll add a tax if you don’t buy health insurance, and they’ll subsidize you under a certain level of income if you do. That’s not that different than Obamacare. But it means that you’ve got nearly 50 percent of Australians who have private-sector health insurance and that gives improved healthcare and keeps public sector costs down. Is that a better alternative than Medicare for all? I would say it is.”

The Republican Party must reevaluate its approach towards government’s role in economic affairs, said Olsen.

“Does the Republican Party see that the federal government has a role to play in helping to address the nation’s economic and social challenges?” asked Olsen. “The default position on the right — although they will often deny it — is no.”

Olsen continued, “It’s one of the reasons why you saw nothing happen when Republicans controlled Congress rather than reduce taxes for corporations and wealthy people and some individuals, thanks to Marco Rubio’s tax credit, which most of the leadership fought until they had to give it to us.”