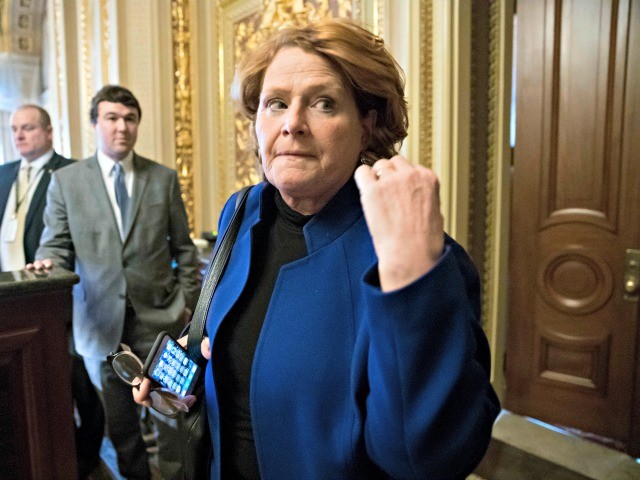 Sen. Heidi Heitkamp (D-ND) admitted on Sunday that she did not make the “smart political move” by voting against Supreme Court Justice then-nominee Judge Brett Kavanaugh.

Sen. Heitkamp admitted that her vote against the president’s nominee might create some political backlash against her.

“The smart political vote would have been to vote for Kavanaugh,” she said, suggesting her move against Kavanaugh would upset voters in a state that went for Donald Trump during the 2016 presidential election by 35 points. Sen. Heitkamp only won her last election in 2012 by 3,000 votes.

The North Dakota Democrat also suggested that she would rather focus on free trade and her opposition to the president’s tariffs on China, “not a Supreme Court nomination.”

Lee Klein, a retired insurance executive, and North Dakota local, suggested that Sen. Heitkamp’s vote against Kavanaugh “is going to sink her.”

Joel Heitkamp, the senator’s brother and a local North Dakota radio host, said, “I can sit here and lie to you about it and say it’s not a big deal but it’s a big deal, it’s a really big deal.”

Rep. Kevin Cramer (R-ND), who hopes to unseat Sen. Heitkamp in the November Senate race, asked in an interview in Bismarck, North Dakota, what would happen if the North Dakota Senate race would become a contest between the state’s Republican and Democrat, Cramer did not hesitate to say, “She’s toast.”
“But she’s done her best to try and make it not that,” Cramer added.

Heitkamp, however, recognizes the potential political backlash of voting against Kavanaugh for the Supreme Court.

On Sunday, the day after the Kavanaugh confirmation vote, the North Dakota Democrat released a new ad that details her decision to vote against the president’s Supreme Court nominee.

Heitkamp said in the ad that Kavanaugh did not “tell the truth and even if he did, he showed himself to be too biased to be impartial.”

“I voted for Neil Gorsuch, so I know there are many conservative judges who can fill this job without tearing our country apart,” Heitkamp added.

Heitkamp’s latest ad arises as another ad touting her bipartisan credentials mysteriously disappeared from the Internet the same day after the senator announced her opposition to Kavanaugh.

“This is no surprise,” Wilkins told Breitbart News. “With just over a month left until the election, the Heitkamp campaign is desperately scrambling to rewrite her out-of-touch, liberal voting record; but it’s not working.”

Heitkamp’s decision to oppose Kavanaugh comes as a Fox News poll found that Cramer has a 12-point lead over Heitkamp. In the last Fox News poll, the Republican congressman only had a four-point lead.