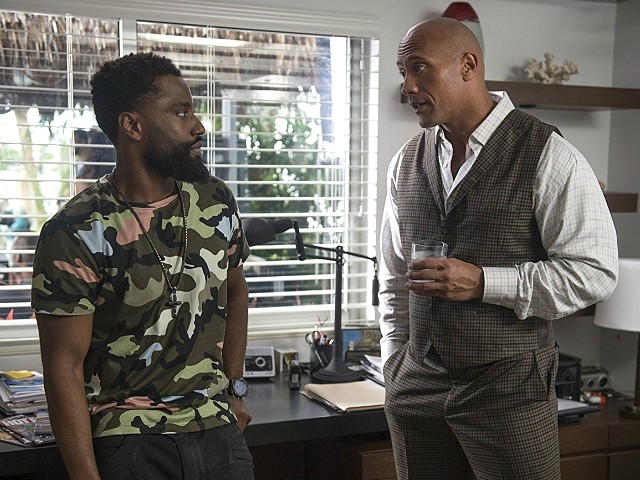 In the episode, entitled “The Kids Are Aight,” Ricky Jerret (John David Washington), a retired black football player, is attending a backyard party with his wife (Brittany S. Hall) and his new white neighbors with the unsubtle last name of “White.”
The offensive scene begins with Ricky and his wife — both black — chatting with a group of boastful, boorish, white people who are slapping backs and acting totally clueless that their attitudes and rhetoric might be off-putting.

During the discussion, one of the white party-goers excuses President Donald Trump, saying that he is “eccentric, but so were so many of our great leaders,” without giving any examples.

Another white character notes that Trump is “is moving us forward, and the rest is just noise. I just mean you have to look at what he’s doing for people like us.”

To that, the former NFL player says, “Like us?”

“Yeah, successful, self-made Americans,” one of the white men replies.

Then Jerry White (Kristoffer Polaha) goes on in a boastful, brash manner explaining, “Yeah, come on. We work hard, we got rich as fuck on the backs of our own sweat and tears, and he wants to let people like us keep the fruits of our labor. I think that’s something that the whole country can get behind. Lookit, we didn’t ask for any handouts. We did it by grinding it out, and so can everybody else.”

That rants may seem like sensible stuff, but the actor delivers the lines in a boastful, dismissive, arrogant manner; it’s not delivered like a serious philosophical point.
To that tirade, Ricky is clearly leery about the white people with whom he is interacting. But it is the next scene where the hate breaks free.

In the next scene, the ladies have left the cabana, and it is just the men left talking. And soon the topic of football players taking a knee comes up. The white guys realize that Ricky supports the NFL’s anthem kneelers and they guffaw and point at Ricky like frat boys braying “you would fucking kneel!” This after Ricky is seen as the sensible one asking not to get into the discussion in the first place.

The back and forth then becomes heated between the black football player and the white men at the party. The blowout ensues, courtesy NewsBusters:

Jerry: He’s your president too, man.

Ricky: Where the fuck is our respect, huh?!

Jerry: What are you talking about?

Jerry: This is not about race!

Ricky: My mother raised me– a single mother on welfare. Government cheese and white bread. And I’m here because I got some assistance when I needed it.

Ricky: That’s right, I am an exception. So, fuck you.

After the tirades and the tweets, Ricky’s father, Dennis (Robert Wisdom), cautions his son to dial back the attitude unless his career might end as Kaepernick’s did. But Ricky defends Kaepernick saying, “Well, that man led a movement. What are people gonna remember me for? Or you, old man?”

Dennis, though, offers some levelheaded advice: “Look, a legacy is earned on the field, in the grass between the chains, not by running your goddamn mouth,” he says. “So, shut it before it costs you more than you can cover.”