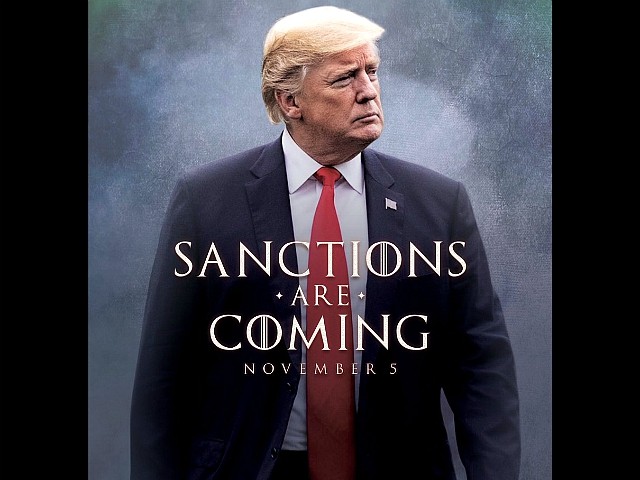 HBO issued a statement Friday accusing President Donald Trump of misappropriating its trademark after he tweeted a Game of Thrones-themed meme about imposing sanctions on Iran.

The Trump administration on Friday announced the reimposition of all U.S. sanctions on Iran that had been lifted under the 2015 nuclear deal, ramping up economic pressure on the Islamic Republic as the president completed the unraveling of what had been one of his predecessor’s signature foreign policy achievements.

The sanctions, which will take effect on Monday, cover Iran’s shipping, financial and energy sectors and are the second batch the administration has reimposed since Trump withdrew from the landmark accord in May.

Shortly after the announcement, President Trump tweeted a movie poster-like image of himself walking out of what appears to be fog with the phrase “Sanctions are Coming, November 5.”

“We were not aware of this messaging and would prefer our trademark not be misappropriated for political purposes,” the premium cable network said in response to the president’s tweet.

While it appears HBO may not be fans of President Trump using one of its most popular programs’ imagery to advance his administration’s foreign policy objectives, it had little issue with handing over advances episodes of Season 6 of Game of Thrones when requested by then-President Barack Obama. “When the commander-in-chief says, ‘I want to see advanced episodes,’ what are you gonna do?” producer David Benioff said during the program’s Facebook Live stream of the season premiere.

“I think, for both of us, finding out the President wanted advanced copies of the episodes was an ‘ah-ha’ moment,” Weiss continued. “That was a very strange moment.”

With limited exceptions, the sanctions will hit countries that do not stop importing Iranian oil and foreign firms that do business with blacklisted Iranian entities, including its central bank, a number of private financial institutions, and state-run port and shipping firms, as well as hundreds of individual Iranian officials.

Secretary of State Mike Pompeo said the sanctions are “aimed at fundamentally altering the behavior of the Islamic Republic of Iran.” He has issued a list of 12 demands that Iran must meet if it wants the sanctions lifted. Those include ending support for terrorism and military engagement in Syria and a complete halt to its nuclear and ballistic missile development.