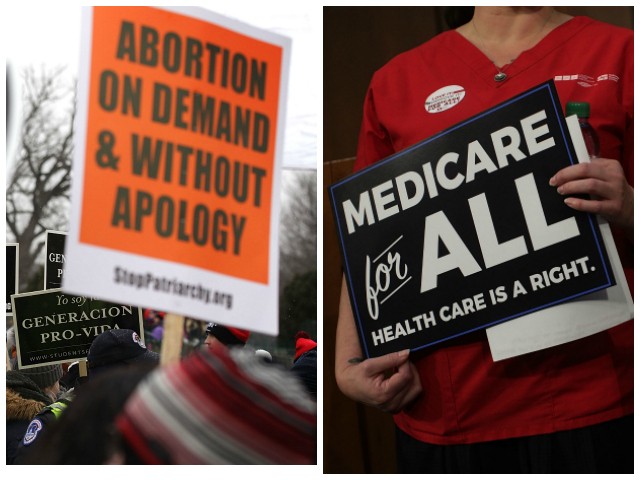 It’s been a shocking few weeks for abortion extremism, from New York’s shocking late-term abortion law to Virginia’s mercifully unsuccessful attempt to legalize infanticide. It’s time to start talking about death panels again, because this casual attitude toward the destruction of human life is a grim omen of what “Medicare for All” would be like.

If the Left is so comfortable with abortion that it’s openly defending late-term horrors and the slaughter of children outside the womb, imagine what they’ll do with the elderly and infirm once they control medicine and hardcore rationing inevitably sets in.

The Left quickly realized it allowed its anti-human freak flag to fly a little too high in Virginia. Frantic attempts were made to gaslight American voters into believing Governor Ralph Northam didn’t say what he actually said about killing born-alive infants. The effort subsided as Northam’s defenders realized he was, if anything, understating the barbarism of the legislation in question. There was also the inconvenient matter of his equally infamous comment that infants would be “kept comfortable” while their mothers and doctors decided whether they should live or die.

Even as left-wing media outlets cranked out the predictable tidal wave of “Conservatives pounce!” headlines, the Virginia bill’s sponsors scampered away from their defeated legislation, implausibly claiming they never actually read the bill they pushed so hard and did not fully understand the horrors it would have authorized.

The delegate who proposed the bill, Kathy Tran, took a stab at using the Jedi mind trick to make everyone forget she advocated abortion at 40 weeks with nothing more than a single doctor’s concern about the “mental health” of the recalcitrant mother, but unfortunately for Tran, her words were caught on video with extensive captioning:

State Delegate @KathyKLTran introduces a bill that would – in her words – permit abortion through the 40th week of pregnancy.

It’s possible Northam and some of the other Democrats who pushed for this bill did not truly understand what it meant, although that excuse speaks very poorly of their intellectual curiosity and basic competence as elected officials.

With pro-lifers largely purged from the Democrat Party, its collective mind does not dwell overlong on the minute details of abortion legislation. Anything that makes abortion easier is good and empowering for women, opposed only by religious fanatics who can’t wait to make The Handmaid’s Tale a reality. Deliberate ignorance of ugly details is taken as a sign of passionate commitment – those who are totally down with The Movement don’t ask a lot of questions.

In truth, as the news of the past few weeks illustrates, abortion extremism is the fanatical crusade. It has strong religious overtones, even though most of its stalwarts are professed atheists. Their religion is the Church of the State. Abortion extremism gives them an exhilarating personal taste of the divine powers of life and death wielded by the government.

Abortion extremism represents the ultimate triumph of politics over biology, which is a major concern of the Left these days. Abortion ideology turns a human being into a disposable mass of tissue until politicians say otherwise. It neutralizes one of the most profound differences between women and men. Late-term abortions conducted far beyond the needs of maternal health, or any reasonable standard of individual autonomy, are a brutal exercise in political math: the baby doesn’t get a vote, so the baby doesn’t get to live.

How can anyone expect a good outcome from handing control of medicine over to people who have declared political war on biological reality?

Not only do the Democrats’ “Medicare for All” socialized-medicine pipe dreams have such staggering price tags that even Kamala Harris felt the stabbing pain in her wallet, but they would put profound and deeply personal medical decisions in the hands of authoritarian bureaucrats whose ideology is hostile to the very concept of individuality.

When modern Democrats are quizzed about “rights,” they invariably respond with redistributionist gifts bestowed by the all-powerful State, not the inalienable individual rights envisioned by America’s founders. The right to keep and bear arms is an annoying distraction Democrats want to burn out of the Bill of Rights, but they can’t wait to talk about the “right” to “free” health care.

When it becomes impossible to keep the copious promises of socialized medicine – as it quickly proved impossible to keep the far more modest promises of Obamacare – and the money runs out, rationing will be the inevitable result. The people who view born-alive infants as an inconvenience to be disposed of will see no stronger ethical barrier against disposing of inconvenient sick or elderly people, especially if they have the wrong politics.

The Left just made it painfully clear that people who wear MAGA hats should not be regarded as fully vested and protected American citizens, but instead should be subject to personal destruction and even physical assault at the whim of a mob. Before long they were unironically quoting 1984 as a social instruction manual. A few months before that, they insisted the presumption of innocence should be stripped from men with the wrong Party credentials. How long would it take before some version of China’s “social credit system” began creeping into tightly-rationed socialized medicine, its electronic infrastructure provided by the same companies that currently rate mainstream media hoaxes as reliable news stories?

The media that treated the Kermit Gosnell horror show as a “local crime story” unworthy of national coverage is currently framing the Virginia abortion controversy as Republicans unfairly attacking earnest Democrats by accurately quoting them. No one in the press seems interested in describing Northam, or even Tran, as an “extremist” or “hardliner,” even though their positions are the very definition of extremism, as far from mainstream American thought as Pluto is from the Sun.

Does anyone trust partisan journalists to serve as tireless watchdogs against corruption in a Democrat-controlled socialized medicine scheme? Who expects their coverage of anti-life provisions in “Medicare for All” would be any more informative than their coverage of the latest abortion bill disasters?

Over on the other side of the pond, Remainers openly hope elderly Brexiteers will drop dead and change the political balance of power in the United Kingdom. Imagine eager young millennial socialists in America asking why the scarce resources of a broken-down “Medicare for All” system should be wasted on helping old people who stubbornly refuse to embrace the glories of social justice and central planning.

The Left did a remarkably thorough job of wrecking American demographics before they gained control of medicine. They’ll do an even better job of surgically altering the electorate once they are holding all the scalpels.

The most dangerous thing about giving the Left power over medicine is that anti-humanism is deeply woven into their ideology. They see people as problems for the State to solve. They think overbreeding, carbon-huffing humanity is a cancerous tumor upon the windswept skin of Mother Earth. They use every bit of power they obtain to get even more power, and they very much believe in using government force to engineer society, viewing the masses as clay to be molded rather than a mighty sovereign force to be respected. Give them control of medicine and they will use it to control you.

As their abortion politics demonstrate, leftists see human life as currency, not priceless treasure. They will spend it freely to accomplish their political objectives. They are using abortion politics to devalue that currency right now.