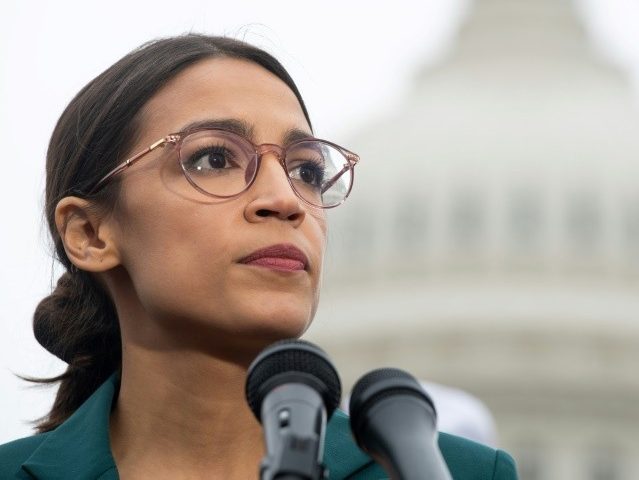 Conventional wisdom holds that relatively moderate, or at least politically savvy, leaders in the Democrat Party are horrified by the rollout of Alexandria Ocasio-Cortez’s “Green New Deal” and House Speaker Nancy Pelosi put AOC in her place when she “threw shade” at the program (as CNN put it) by sniffing disdainfully that “nobody knows what it is.”

Do not believe this kabuki theater for an instant. The Green New Deal (GND) holds all the power Pelosi and Democrat peers have dreamed about seizing for their entire lives. They will take as much of it as they can get.

For one thing, consider Pelosi’s entire shade-throwing quote: “It will be one of several or maybe many suggestions that we receive. The green dream, or whatever they call it, nobody knows what it is, but they’re for it, right?”

Does anyone remember the last gigantic power grab Pelosi claimed to know very little about? It was called the Affordable Care Act, a.k.a. Obamacare. Pelosi infamously chirped that Congress would have to pass the bill so Americans could “find out what’s in it.” To put it mildly, she does not have a problem with poorly crafted legislation, as long as it has soaring left-wing ambitions.

Writing at The Resurgent on Thursday, Erick Erickson noted the Green New Deal is exceptionally amateurish, packed full of typos, bad grammar, “weird omissions,” cow flatulence, and mandatory vegetarianism. He anticipated Democrat leaders would become furious with the young socialist punks for overreaching, making them look foolish, and scaring the hell out of sane American voters while “scaling it back or redirecting it could cause a serious rebellion among that party’s progressive members.”

Pelosi said her caucus would consider “many suggestions” for taking control of the U.S. economy under the mantle of environmentalism. How much less ambitious do you suppose those other suggestions will be? Anything less completely nuts – say, a proposal that doesn’t rant about guaranteed income for people who don’t work and allows the people who do to keep their automobiles – will be portrayed as an eminently reasonable compromise no Republican can refuse in good faith. Blocking it will bring back the cries of “obstruction” and “gridlock” that became strangely muted when Democrats lost all power in Congress.

The Green New Deal is an opening bid by an emboldened Democrat Party tacking hard left as it courts a radicalized voter base and feels the wind of politicized Big Tech filling its sails. How long do you imagine it will be before harsh criticism of the GND and its acolytes get people banned from social media platforms, the way telling journalists they should “learn to code” does today? When radicalism is normalized, common sense becomes extremism.

Pelosi might seem a bit dubious about the GND, but most of the prospective 2020 Democrat presidential field signed on immediately. Sen. Cory Booker (D-NJ) favorably compared it to World War 2 and the moon shot. Sen. Elizabeth Warren (D-MA) said she was “proud” to support the Green New Deal because “if we want to live in a world with clean air and water, we have to take real action to combat climate change now.” Sen. Kamala Harris (D-CA) echoed Warren’s statement almost word for word. Sen. Kirsten Gillibrand (D-NY) praised it as “ambitious” and “bold.”

All of these senators co-sponsored the Green New Deal, along with alleged “moderate” Sen. Amy Klobuchar (D-MN). Pelosi isn’t whipping deranged upstart Ocasio-Cortez into line – she’s the only major figure in the Democrat leadership who has been even mildly critical of the GND. Former Vice President Joe Biden is the only major 2020 Democratic presidential contender who has not openly endorsed it.

One might think the disintegration of the Green New Deal effort over the weekend – with AOC and her aides bumbling around like circus clowns to claim their own proposal was some sort of Republican psy-ops trick – would be a major embarrassment for the Democrat leadership. Almost all of the Democrat presidential contenders co-sponsored a bill dismissed by its own authors as a hallucination. Isn’t that a bit… problematic?

Of course not, silly. Nobody in our tireless firefighting truth-guarding investigative media is going to make Booker, Warren, Harris, et al apologize for endorsing a bill that disintegrated in 48 hours, or ask questions about their judgment for supporting legislation they either didn’t read or did not think about carefully.

The media won’t even let Ocasio-Cortez suffer for making a fool of herself. Evening news shows are already flushing the GND debacle down their Memory Hole and reporting only that AOC cares a whole lot about the environment. At worst, the press will describe the GND as “expensive” without dwelling on its utterly insane details. They will help AOC push a narrative that its worst features came from some mythical early draft nobody was supposed to see. Left-wing social media has already convinced itself the most laughable aspects of AOC’s Marxist horror show were invented by right-wing Twitter trolls.

DNC Media will not allow the Green New Deal to become a political disaster Democrat leaders and presidential contenders have to run away from, which is why the idea of Pelosi going to war with her party’s young socialist wing over the bill is absurd. Ocasio-Cortez will be portrayed as a deeply caring, environmentally sensitive young woman who knows we must DO SOMETHING RIGHT NOW about climate change, and perhaps got out a little over her skis. Her only sin is that she cares so damn much!

The fact that relatively little of her bill has anything to do with environmentalism will be left conveniently unmentioned. Her critics will be told to shut up until they produce their own trillion-dollar climate change bills.

Since the Democrats pay no price for overreach – no one in the media will ever refer to AOC or her co-sponsors as “extremists” or suggest their views are “out of the mainstream” – they can use radical proposals like the Green New Deal to push the political center of gravity in America to the left. Ocasio-Cortez herself is already boasting of doing exactly that. Former presidential candidate and governor Howard Dean on Friday praised the GND for “pushing the boundaries” on “Medicare for All and the Green agenda” while cautioning the revolutionaries to “watch the rhetoric.”

Speaker Pelosi is not at all against moving America to the left. Her only real concern is pushing so hard that Democrats lose the ridiculous “moderate” masks they must wear to fool voters during election years.

Conservatives should do the opposite of what Pelosi wants. Don’t let the media bury the Green New Deal or conceal the extent of AOC’s lunacy. Keep repeating the insane details of the bill every declared Democratic presidential candidate signed on to. Do not allow AOC and her apparatchiks to pretend they did not make these proposals. Make it clear that the tyrannical folly of the deal is the true heart of the Democrat Party, the wish list they only whispered to each other until Ocasio-Cortez made it public and demanded everything, all at once, damn the cost. How many of her individual proposals would all major Democrats strongly object to? They just get nervous when all of those demands are made at once.

Above all, do not allow the Green New Deal to reinforce climate change mythology or accept the premise that capitalism is evil. Democrats would have to impoverish, imprison, and kill a staggering number of Americans to impose the GND. Anyone seeking pure evil in a political document need look no further.