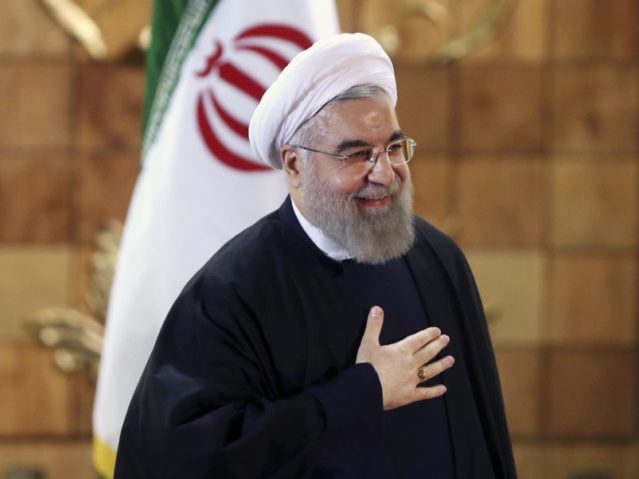 Iran’s President Hassan Rouhani reportedly claimed this week that U.S. President Donald Trump’s administration is making daily attempts to negotiate with the Islamic Republic, suggesting that America is willing to suspend sanctions against Tehran if the Shiite powerhouse gives in to its demands.

“Americans are very willing that such conditions [Iran’s defeat] be created, and send messages for negotiations through various methods every day,” Rouhani declared on Wednesday, according to the pro-Iranian regime Tasnim News Agency.

The Iranian president reportedly alleged that Tehran has turned the plethora of recently imposed Trump administration sanctions, including those suspended under the controversial 2015 nuclear deal, “into opportunities,” adding that the Islamic Republic will overcome the restrictions.

At the end of last month, the Islamic Republic boasted that it will export domestically designed and manufactured fighter jets and training aircraft despite sanctions imposed by the U.S. against the move.

On Tuesday, Rouhani vowed that Iran would ensure that “no oil” is exported from the Persian Gulf region if the United States moves ahead with restrictions on Tehran’s oil industry.

During his comments on Wednesday, Rouhani “said Iran could have opted for another approach and given in to US demands, but in that case, the country’s dignity, independence, democracy, and greatness would be compromised,” Tasnim noted.

In August, Iran’s Supreme Leader Ayatollah Sayyed Ali Khamenei blasted the notion of any negotiations between Tehran and Washington, saying talks with a bullying regime is forbidden and would be detrimental to Iran.

“I ban holding any talks with America … America never remains loyal to its promises in talks … just gives empty words … and never retreats from its goals for talks,” Khamenei proclaimed, according to the National.

This year, President Trump in July offered to negotiate a “more comprehensive” nuclear deal, but Iran said it would not negotiate under the pressure of sanctions.

The Trump administration pulled America out of the nuclear deal in May, saying it failed to fully address the regime’s malign activities, including its ballistic missile programme and its support for terrorism.

Rouhani argued in November that the waivers are a testament to America’s incapability to sanction Iran fully.

“What the Iranian officials said that the U.S. is not able to zero Iran’s oil exports was proved with the U.S. recent admission,” he reportedly said, referring to the United States sanction waivers granted to eight countries.

“The U.S. announced that it cannot zero Iran’s oil sales because the oil prices will rise to $150; this is what we had said [before]. In this region, either Iran’s oil is exported or others will be in trouble as well,” he also said.

According to the article, neutering Iran’s influence in Iraq is a “long-term goal.”

Iraq won’t be left hanging amid Washington’s sanctions on Iran, which supplies almost half of its electricity, experts familiar with U.S. policy say. The President Donald Trump administration in November granted Iraq a 45-day waiver to continue its energy purchases — and at the risk of setting off more instability in the country, the U.S. is now expected to continue allowing transactions with Iran under yet-to-be-decided conditions. But the sanctions provide a new urgency to accomplish something Baghdad and Washington have been pursuing for some time: reducing the war-weary country’s economic reliance on Tehran.

In November, the U.S. unleashed a wave of sanctions on Tehran’s oil, banking, shipping, and other sectors, marking its “largest ever single day” of economic penalties against the Islamic Republic and fulfilling the President Trump’s campaign promise to take a harder line against the Islamic Republic, deemed the world’s leading sponsor of terrorism by the United States.