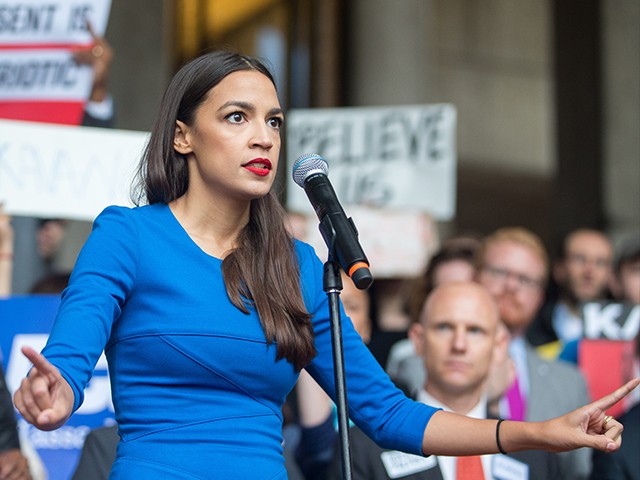 The Green New Deal has been hailed by Democrats and liberal pundits as one of the most important proposals to tackle global warming in decades, but don’t be fooled: Many supporters of the Green New Deal know it will do absolutely nothing to reduce global temperature or prevent future temperature rise—the primary purpose of the proposal, according to Ocasio-Cortez. The real goal of the Green New Deal is to impose a series of radical, socialistic programs—policies that would dramatically increase the size and power of the federal government, cause immense harm to the U.S. economy, and run up the national debt by trillions of dollars.

In a proposed draft resolution to form a House committee to create legislation for the Green New Deal, Ocasio-Cortez provided important details for her plan. One of the most important elements of the plan is a mandated transition away from fossil fuels in virtually all aspects of American life and the creation of a huge new renewable energy industry. Ocasio-Cortez proposes ending the use of fossil fuels in nearly every industry, including on farms and in all manufacturing, in just 10 years, from 2020 to 2030. Additionally, all power in the United States would need to be produced using renewables, which have been proven on countless occasions to increase the cost of electricity.

Ocasio-Cortez doesn’t stop there, however. In addition to forcing everyone to use renewable energy, thereby closing entire existing energy industries and taking away the jobs of tens of thousands of people, she also proposes “upgrading” every single home and business building in the country, to make them more energy efficient and for “comfort,” a policy that would likely cost trillions of dollars on its own.

Ocasio-Cortez says the Green New Deal would create a federal jobs guarantee that would “assure a living wage job to every person who wants one,” as well as a single-payer health care program that would put the federal government in charge of the entire health care industry—a plan the Mercatus Center says will cost at least $32 trillion in its first 10 years.

Ocasio-Cortez wants the federal government to lead the charge in this effort, but she also says the legislation should “deeply involve national and local labor unions to take a leadership role in the process of job training and worker deployment.”

How would the government pay for these multiple trillion-dollar programs? By raising taxes and, most importantly, printing money. According to the Green New Deal’s own “Frequently Asked Questions” section (in Ocasio-Cortez’s draft resolution), “Many will say, ‘Massive government investment! How in the world can we pay for this?’ The answer is: in the same ways that we paid for the 2008 bank bailout and extended quantitative easing programs, the same ways we paid for World War II and many other wars. The Federal Reserve can extend credit to power these projects and investments, new public banks can be created (as in WWII) to extend credit and a combination of various taxation tools (including taxes on carbon and other emissions and progressive wealth taxes) can be employed.”

Ocasio-Cortez and other Green New Deal advocates say these proposals are necessary to stop human-caused global warming, but the truth is the Green New Deal would do absolutely nothing to avert future global temperature increases, even if we assume that humans’ carbon-dioxide emissions are the primary cause of climate change and that moderately warmer temperatures would create more harm than good. (Both of these assumptions have been challenged by many highly prominent scientists and economists. For more, see The Heartland Institute’s Climate Change Reconsidered series.) The reason the Green New Deal wouldn’t have the impact its supporters say it will is because the rest of the world is increasing its CO2 emissions at a rate so high that whatever reductions occur in America would be more than offset by increases in other countries, especially China and India.

Ocasio-Cortez and others know the Green New Deal won’t stop climate change, but this plan isn’t really about global warming; it’s about creating massive new government programs that will increase the power of government and move the country closer than ever to socialism.

Those of us who support free markets and individual liberty must stop the Green New Deal, or else America as we know it will disappear entirely.

Justin Haskins (@JustinTHaskins) is the executive editor and a research fellow at The Heartland Institute and the editor-in-chief of StoppingSocialism.com.