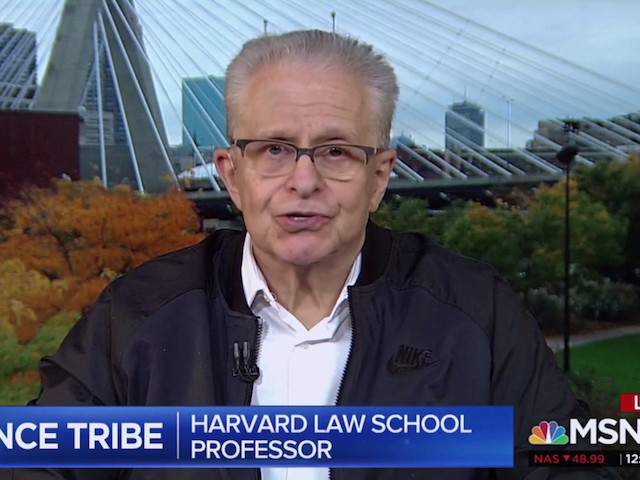 When asked why he believes the appointment of Whittaker is illegal, Tribe said, “The fundamental reason is the U.S. Constitution in Article 2, Section 2, Clause 2 makes it absolutely clear that a principal officer of the United States, that is somebody who exercises enough power so he’s answerable only to the president, cannot be appointed just by the president, even if Congress were to authorize it, which it hasn’t here; but must be appointed pursuant to the advice and consent of the Senate. The president has no power to circumvent that.”

He continued, “I think when the Democrats take over the House they should simply disregard everything that this pretender to the position of attorney general tries to do. He’s not Senate confirmed. That makes his appointment unconstitutional. It shouldn’t get lost in technical details.”

He explained, “What I mean is, the way they do it is pick up the phone and ask Robert Mueller to come over to the Hill and testify under oath to all of his findings except for the things that are classified.”

He added, “If the president uses one of his powers corruptly to cover up his own criminality or serious wrongdoing and that’s what’s going on, the president’s displeasure with Jeff Sessions, then that’s an abuse of power and that enters impeachment territory. It seems to me from the beginning when he basically said, ‘I don’t think Jeff Sessions should recuses himself,’ even though the rules of the Department of Justice told him he should because he was involved in the campaign he would otherwise be supervising the investigation of, ‘I don’t think he should recuse himself’ and he made it transparent to anyone with eyes or ears, the reason is he wanted someone in that position who would shield him, protect him from the investigation. In other words, obstruct the investigation. The installation of Whittaker is unconstitutional as well as a violation of the Federal Vacancy Reform Act. And the removal of Sessions, which was only covered with a thin fig leaf of resignation, it was a firing, the removal was itself part of a pattern of obstruction of justice. So we are witnessing a slow motion constitutional crisis. I hope the Constitution manages to stand up to the stress test that is being imposed on it.”